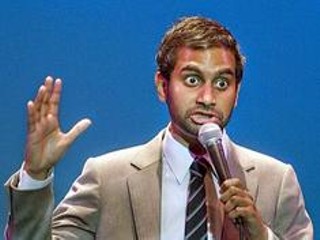 The Moontower Comedy & Oddity Festival kicked off last Friday night with comedian Aziz Ansari (Parks and Recreation) killing it at Bass Concert Hall in what might be the most crushed velvet that stage sees this year. Strangely, there was no coconut water, though.

Joe Mande, a Los Angeles-based comedian and writer for Parks and Recreation, opened for Ansari. While talking about some of the cities where he’s been touring, he shared an anecdote about a recent show in Seattle in which he found himself on a small Macklemore rant. “I think I called him organic Vanilla Ice or something,” Mande said. He found out later that Macklemore was in the audience that day. The thought of that set Mande to work unraveling the enigma of Macklemore. “He’s the only rapper in the world who you don’t want to talk shit to to his face because you’re worried about what he’ll do to himself,” joked Mande. He then mused on how Macklemore’s crew might respond, coming up with: “Yo, you can’t say that shit to Macklemore. He’s a cutter.”

Mande later moved on to his time here in Austin, naturally expressing how much he likes the city. But he did have to ask: “Do you ever think, ‘We live in one of the best cities in one of the most fucked-up states’?” Everyone laughed.

To be fair, Texas has had its share of strange decisions. But as he transitioned off Texas and onto the shortcomings of his own home state of California, Mande made it clear that there are poor decision-makers everywhere. He pointed to a restaurant chain in L.A. called Soup Plantation. Suffice it to say that the comedian came up with his own list of (terrible, horrible, racist) restaurant names, which he then had to admit were all better than “Soup Plantation.” His ideas were at least puns.

Overall, Mande’s solid set featured mostly longer anecdotes that felt more like comedic storytelling than “jokes.” And that’s despite the use of an app he couldn’t put down that produces goofy sound effects. The gimmick mocked the radio DJ style, while still evoking some of its techniques. Strangely, it never got annoying. Thank Mande’s great comedic timing and his subtle understanding of when to be tongue-and-cheek and when to move on. The audience loved it.

Ansari took the stage next, wearing a crushed red velvet jacket, a cup of tea waiting for him on his stool. Before starting, he asked the audience to take all the photos they needed while he pretended to tell jokes. “Congratulations, you now have a blurry, shitty photo you’ll never look at,” said Ansari, who further joked that months from now people would mistake the photo for a picture of Usher. He then kindly asked the phones be stored.

The majority of Ansari’s set focused on relationships — the pros and cons of being single vs. married and how much harder social media makes being single today vs. 30 years ago. “There is no out-of-sight, out-of-mind anymore,” said Ansari. “You have to read all the mundane shit that’s more important than your feelings.” (Thanks, Facebook.) And it doesn’t get easier with age: “You get to a certain age when you have enough data to statistically know that the best thing to do is to go to the bathroom and jerk off.” But for those currently looking for partners, he did have some tips. For example: “All texts go through.” If you text someone and don’t receive an answer, don’t chalk it up to an otherwise reliable method of communication momentarily going on the fritz.

Between rehearsed bits, Ansari did quite a bit of crowd work. During one such segment, he asked single audience members communicating with a new person for the first time to bring their text messages to the stage. At this point, the show took a surprisingly adorable turn. A Yu-Gi-Oh! and Magic the Gathering enthusiast shared a recent text message thread between him and a comic book fan he met. On learning that the girl mentioned comics first, Ansari offered this simple advice: “Joe, do not fuck this up, Joe. Joe? Do not fuck this up.”

Despite the back-to-back shows, Ansari’s ultra-animated enthusiasm never declined – not even as the second show’s encore pushed toward midnight. He received two standing ovations, one when the main show ended and another after the encore.