Portlandia: Behind the Scenes With the Creators

SXSW panel reveals that everything on the show really exists 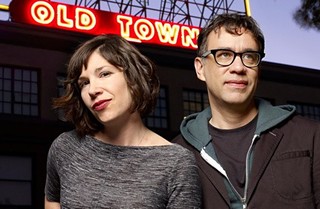 Yesterday, Fred Armisen and Carrie Brownstein, co-stars/creators of Portlandia, joined fellow comedian Matt Braunger to discuss their creative process and the show’s evolution. We have it on good authority that the panel attracted the largest recorded count of beards and skinny jeans in one room to date.

Since its debut in 2011, Portlandia has lovingly mocked the hippie and hipster cultures that Portland shares with cities like Austin. Iconic Portland locations and personae provide the source material, which Armisen, Brownstein, and final co-creator/writer, Jonathan Krisel, then turn up to eleven. For example, during the panel, Armisen and Brownstein discussed the “In Other Words” bookstore, the location of a recurring bit on the show about the two feminists running a bookstore and how they spend their time there. “It’s a real store,” said Armisen. “Everything you see [on the show] is in ‘In Other Words.’ That whole set is a real place.”

Fortunately for Armisen and Brownstein, the owners of the bookstore love the show, and the show’s creators have received mostly positive responses from its inspirations. The fact that Armisen and Brownstein are part of the community they love to tease probably plays a part. This came up during the panel Q&A when a fan asked about the prevalence of cycling in the series and whether Armisen or Brownstein bike. “I bike every summer,” said Brownstein. “I think for people who don’t bike all the time, what is weird is, you drive your car 300 days of the year, and then that handful of days you bike you become ‘that person.’ You become self-righteous. When I’m biking, I want to stare down someone in a car and let them know ‘I biked.'" After all, as Brownstein pointed out: "Half the reason to bike to work is to say 'I biked to work.'"

So far, music has played almost as big a role in the series as the people and places of Portland, and it sounds like season four will be no exception. One skit in particular cameos Jello Biafra of the Seventies/Eighties punk band the Dead Kennedys. In discussing the filming of that episode, Brownstein said that Biafra was "very serious about the acting. He came the night before. We were filming in the woods. He got off the plane to the car. Met us in the woods and wanted to know what his motivation was in the scene. No one has ever asked that."

Music’s prevalence in the show is no coincidence. Like many of the cast and crew, Armisen and Brownstein are both musicians, and they see similarities between writing comedy and writing a song or an album. "Between Jonathan and Fred and I, we all grew up with music. It was a very transformative experience for us, so it’s still the lens through which we see a lot of the world,” said Brownstein. "When we approach a show, we look at it in terms of rhythm, texture, and pacing. And the editors – the editors have a very percussive quality to the way they edit.”

Stream or download episodes one and two of season four here, along with other episodes. Episode three airs Thursday at 9pm on IFC.