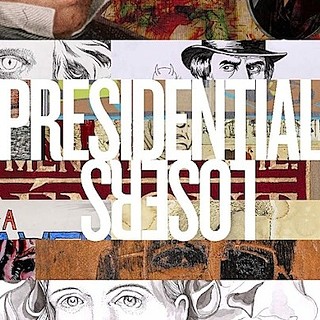 Looks like we do still have Dick Nixon to kick around some more, after all.

Well, Nixon, yes … and George McGovern, Martin Van Buren, William Howard Taft, Daniel Webster, and Charles Cotesworth Pinckney – among 70 others who officially ran for (and lost) the position of president any time in the history of these United States.

[Note: 75 other artists from around the country – for instance: Jim Rugg, Roberta Gregory, Lauren Weinstein, Pat Snow, Kerry Awn, Lance Myers, Regina Allen, Box Brown; and many others – created the pictures of the rest of the Losers.]

These original works of portraiture were first exhibited at a show curated by Austin's arts-fomenter extraordinaire Shannon McCormick at the Salvage Vanguard Gallery in 2012.

AND NOW THEY'RE COLLECTED ALL TOGETHER IN A GORGEOUS HARDBOUND BOOK DESIGNED BY GRAPHIC-ARTS SHAMAN MARC ENGLISH!

Pardon me. It's been a long time coming, this volume of Presidential Losers from S. McCormick, but now it'll be on display and for sale, released at a reception on Sunday afternoon (January 26, from noon until 4pm) at that pop-cultural mecca called Guzu Gallery. With several of the artists in attendance, in case you want to get a copy signed and so on.

[Note: We reckon the ghost of Tricky Dick may be hanging around somewhere nearby, too, shaking his ectoplasmic jowls. But you don't need to have one of those Tim Doyle stickers of Bill Murray as Dr. Peter Venkman to know just who, in that case, you're gonna call …]

See you there, friend.