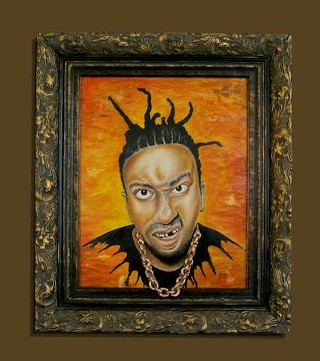 Kanye West, in his trademark sunglasses and a background of Van Gogh inspired swirls, is next to Eminem, who is looking thoughtful with his middle finger resting under his chin. Hung along the wall is Ol’ Dirty Bastard, Missy Elliot, and Jay-Z. They’re part of Janis Fowler’s Rap Royalty series.

Fowler’s genius lies in her ability to combine her admiration for these celebrities with an irreverence and humor. She uses subjects who are well-known and instantly recognizable, creating a common thread that any viewer can relate to. Usually done with charcoal and Nupastel, she captures the essence of the subject’s public persona.

The Notorious B.I.G. is bathed in purple highlights, opulent in a crown with rhinestones affixed to it. Salvaged frames, ornate and painted to match the canvas, give the paintings a rich, museum quality. Will Smith’s frame is made from cassette tapes in primary colors. Bill Murray has a top hat, monocle, and Ziggy Stardust’s lightning bolt across his face. Snoop Lion has a blunt made out of a straw and cigar wrappers that, when hooked up to a fog machine, belches smoke. Ludacris’ hair is made of yarn woven through the canvas.

The textile elements, the ability to reach out and feel the substance of this person, echo the sense of ownership that the public feels toward a celebrity. Rich and opulent, the portraits are reminiscent of European monarchs. These are the kings and queens of our age, the heroes and villains of our collective mythology, and Fowler is their court artist.

The resident artist for Eastside brewery Hops & Grain, Fowler also displayed her Eastside Zoo series. Inspired by a particularly bad-tempered rooster and Thursday night social rides, it is Austin in animal form. A raccoon in a plaid shirt and oversize glasses clutches a PBR, a hummingbird rides a unicycle wearing a bike hat with a jaunty kerchief around its neck.

While the series gently pokes fun at the (sometimes) outlandish hipster styles of the Eastside, it’s an homage to Austin culture. At the end of the day, we’re all different breeds, brought together by a love of the music, art, and spirit of the city.

Holding a mirror up to popular culture, Fowler continues to experiment with new styles and subjects. Her romantic and whimsical style is welcome warmth in a cold January.