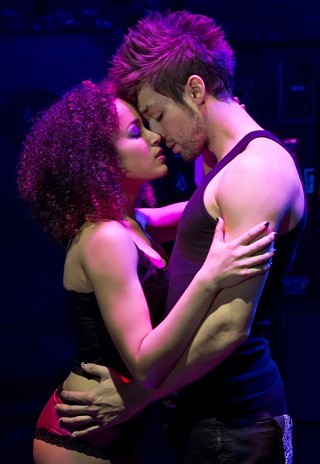 Glancing around Bass Concert Hall at the opening of the touring edition of the rock opera American Idiot, it was clear that the points of reference for audience members included everything from the Sex Pistols’ 1978 performance at Randy’s Rodeo to last year’s apparently underwhelming version of Chicago in this same venue.

In short, the expectation was that people would come away from this experience with a rich and varied range of responses from giddy awe to cynicism, and by show’s end, I believe this forecast has proved itself reliable.

Just as in the ancient mystic trinity, three is a magic number here as scenic designer Christine Jones joins forces with the toxic twins of lighting and projection – Kevin Adams and Darrel Maloney, respectively – to deliver a gorgeously gritty spray-paint-and-band-flyer wall of media that screams 21st Century Breakdown. Likewise, the story – taking its cue from the multi-platinum Green Day album American Idiot – centers on the three musketeers of suburbia: a trio of disaffected post-adolescents who find themselves in very different circumstances as they forge ahead into adulthood.

Indeed, the ambivalence of the young adult years – that trademark push/pull, love/hate relationship 18-24s often have with their parents as they sift through values they seem to share and deplore in equal measure – is a metaphor. American Idiot is the story of an internal conflict rooted in deep embarrassment and civil perfidiousness in post-9/11 America. Its inverted American flag is the totem of a boy who calls his Mom a bitch. He insults her, but continues to write because they’re bound by some beautiful, dreadful, inextricable sense of duty.

Meanwhile, there are inherent challenges in attempting to choreograph rebellion. Punk rock was built on the DIY ethic of self-sufficiency, so to see a gang of people onstage head-banging and fist-pumping in perfect unison makes a mockery of punk’s trailblazing spirit. Perhaps no thematic triad is more obvious in this show than that of sex, drugs, rock & roll – but surprisingly, in the realm of movement, the real moments of beauty come in gesticulating the first two.

Not since Alex Cox directed Chloe Webb and Gary Oldman in Sid and Nancy has a scene of heroin abuse seemed so utterly romantic. Tom Kitt’s arrangement of “Last Night on Earth” provides a mercurial soundtrack for the dance of Johnny (Jared Nepute) and Whatsername (Olivia Puckett) as a pair of contorting lovers in a Sky Candy tangle of rubber tubing. The nodding choir of “21 Guns” is enough to make a straight-edge kid smack-happy.

Cheap thrills? One can only imagine the car ride home as series subscribers pontificate on the questionable necessity of overlong dry-humping clearly meant to imply much more. Yet for many at home in this music capital, it’s more, not less of this debauchery you’re likely to crave. If you go expecting the intensity of a face-melting, boundary-pushing, old-school Bacchanalian rock show, you are likely to be disappointed. Yet the question then becomes: Is it reasonable to expect theatre to capture the heart of rock & roll in an age when rock itself frequently fails to do that? I think not. For my money, I’d still rather throw down with Billie Joe Armstrong than Andrew Lloyd Webber.