Brighten Your New Year With the Jigglewatts 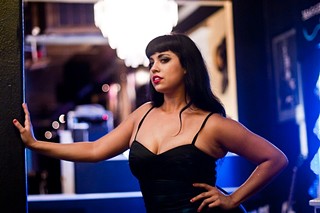 Coco Lectric of the Jigglewatts, kicking out the old year and dancing into the new (Photo by Devaki Knowles)

Halloween, Thanksgiving, Christmas. For most of us, it's candy and stuffing. For the Jigglewatts, each holiday another reason to break out the sparklies and sheddables. With New Year's Eve imminent, Austin's leading burlesque troupe is getting ready to send 2013 out with quite a bang.

With live accompaniment from the Jiggle Jazz Band, company co-founder Coco Lectric and her fellow performers will kissing good night to old father time with their New Years Eve Ball at the Gibson Lounge at Maggie Mae's.

2013 has been a heck of a year for the Jigglewatts. They celebrated their one year anniversary of a weekly residency at Maggie Mae's in November, and undertook a full tour of the West Coast. The smooth-voiced chanteuse of the Jiggleclan, Jolie Ampere Goodnight, released her debut CD Say Goodnight Gracie, just as they all said a fond goodbye to one of their regular members, Miss Pearl Lux. Lectric and 'Watts co-founder Ruby Joule have spent a lot of time on the road, ("We survived our tour," said Lectric, "and that went well, so of course when you make friends in other towns, they want to see you back") performing in other cities as the national burlesque scene continues to reveal its glories. Back home, the Austin Burlesque Alliance has done its share to bind the community together, while Lectric is training up the next generation of shimmiers, shakers and disrobers at the Austin Academy of Burlesque. All in all, it's been a pretty spectacular year for the Austin scene. "I'd like to say I have a hand in it," Lectric said modestly, and on New Year's Eve the crowd can see one of her graduates, Lola LaStrange of the Fat Bottom Cabaret celebrate the calendar flip with a routine of her own.

When 2013 goes out with a bang, the Jigglewatts will be collecting their garters and throwing themselves straight into 2014. In April, they'll be co-headlining the Texas Burlesque Festival with Perle Noir and the Stage Door Johnnies. Before that, it's a crowded January with the annual Jigglewatts rock show, plus the new semester at Lectric's academy. If that sounds like a lot of lace and feathers to handle, then they'll have some assistance with the first two new official Jigglers in years. Fans will know Bunny Blue and Bunny Bang Bang as part of the troupe's cadre of panty wranglers and costume collectors, aka the bunnies. But this year the duo make the jump to full-fledged Jigglewatts. "We haven't had new Jigglewatts in years," said Lectric. "They're going through some intensive jiggle training."

Blue (now to be respectfully known as MsSomething Blue) will be part of the New Year's festivities, and she'll be standing on a crowded stage. High kicking along with her, LaStrange, Goodnight and Lectric will be Miss Lady Luck (last seen at Avant Glam's Christmas extravaganza), academy graduate Rarity Fair, and a special seasonal performance from the Jigglewatts' Snow Bunnies. You fetch the champagne, they'll provide the sparkle.