Magnum photographer Alec Soth and writer Brad Zellar have finished their tour of Texas, and on Saturday they partied. The Harry Ransom Center hosted a pop-up show of the pair’s Texas Triangle project, a two-week photographic and journalistic exploration of the Lone Star State bounded by Dallas, Houston, and San Antonio.

The HRC's second-floor mezzanine was transformed into a makeshift gallery with Soth’s monochromatic images printed both large and small to stunning effect. Many of the pictures were perfect examples of what we do best here: the made-up lady in all her Dallas best; the cheerleader jumping high, legs spread wide; young men with cowboy hats too small to hold all their machismo. Huntsville’s death row, high school football, and church services were all represented. Soth’s lens captures the best and worst of us, and the results are beautiful.

The use of flash was evident and gave much of the work a documentary, even voyeuristic, aesthetic. Some of the subject matter was familiar (a weary Reveille, tired from a long day of mascotting in Aggieland, sat next to her handler) while others were surreal and out of place (a zebra skin draped over a shopping cart somewhere in Austin). This is the sixth such excursion for Soth and Zellar; the former snaps the pictures while the latter pens the words. Their travels have taken them around the country from California to Upstate New York and points in between. The final product will be what they affectionately refer to as one issue of “an irregularly published newspaper of [their] North American ramblings.”

I ran into Soth as he was holding court upstairs. Wearing his signature brown LBM cap – Little Brown Mushroom is the name of his publishing venture – the photographer was gracious in conversation with all who approached. I shared with him my favorite quote about their trip, one Zellar gave to The New York Times: “You go out there, and as corny as it sounds, you see things that are incredibly appalling, but you also see all sorts of stuff that’s really inspiring and encouraging.” Soth added that every place has its problems, but that Texas was a great place to visit.

Before his trip, I had sent him a list of places I thought would make good subjects for him and Zellar to explore, knowing full well they had all the advice they needed. For some reason, my list ended up having a lot of places to eat. Soth admitted that they ate well on their trip and said that modern advancements like Yelp are a great help to the hungry traveler.

A couple of weeks ago, I pre-ordered Texas Triangle. Along with it, I bought the Little Brown Mushroom Coloring Book by Jason Polan, a rather strange set of images just waiting to be filled in by little ones and their crayons. (My wife looked perplexed when it arrived in the mail, and explaining that it was kind of an “art” coloring book didn’t clear things up.) Soth said it was a very Minnesota affair with Coen Brothers and Minnesota Twins baseball references.

With the Ransom Center’s celebration of all things Magnum Photos coming to a close, it was fitting that one of their members celebrated the conclusion of a project with a party on the premises. A packed house certainly enjoyed the drinks and art on a cold Saturday night in Austin. For more images from this series, visit www.littlebrownmushroom.tumblr.com. 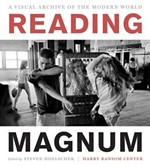