'Dulcey and Roxy at City Hall'

Russia's Maksym Kurochkin weaves our town into his new play 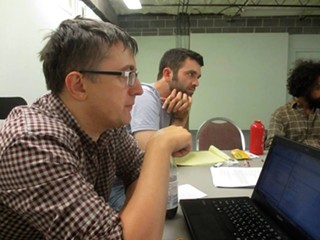 Many a local writer has put our city onstage. Tonight, a Russian takes a turn.

Maksym Kurochkin, the inventive playwright responsible for Vodka, Fucking, and Television and The Schooling of Bento Bonchev, paid a visit to Austin last year when he was the featured playwright for Breaking String Theater's second New Russian Drama Festival. The strong local response to Kurochkin's work – and Kurochkin's response to Austin – prompted Breaking String Artistic Director Graham Schmidt to commission a play from the writer, the stipulation being that said play should be inspired by the writer's experiences here.

For the past week, Kurochkin has been back in town, along with translator/journalist John Freedman and a first draft of the commissioned play. Titled Dulcey and Roxy at City Hall, it concerns a mysterious visitor to Austin and a discussion/confrontation with town leaders at the titular seat of our municipal government. Giving the script its first breaths of life have been local thespians Noel Gaulin, Judd Farris, Derek Kolluri, and, as Dulcey and Roxy, Gricelda Silva and Molly Karrasch, and they're the voices you'll hear at tonight's open reading of the play, starting at 8pm at the Off Shoot, on the east end of the Rude Mechs' Off Center complex, 2211 Hidalgo. Your response will go a long way toward helping Kurochkin and Freedman shape the play, which is due to premiere next April at Salvage Vanguard Theater. For more information, visit www.breakingstring.com.

Gusev
Breaking String's Gusev is a remarkable, feverish journey through the human condition