Ryan Cownie Has Up and Taken Over Avalanche Comedy

And Chris Cubas, on his way to Kansas City, swears this is a good thing 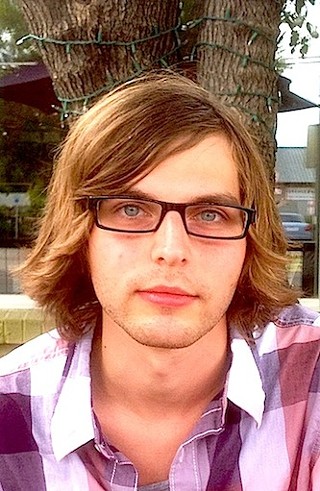 Sir Ryan Cownie of the Nebraska Cownies (by Photo by BRNNR)

I'm sitting across from this young comic, this Ryan Cownie, who's taken over hosting Avalanche Comedy at Holy Mountain on Monday nights.

Chris Cubas, the former host, has absconded with his hilarity and his Superfund-level 'fro-and-beard to work for the Alamo Drafthouse Cinema in Kansas City, and now Cownie's in charge, and I'm looking at him over my big triple-shot cappuccino and I'm thinking, "This guy is like if Kerri Lendo had a male twin."

Which is either incisive as hell or totally wackadoodle, but anyway it's the thought I'm thinking.

The incisive/wackadoodle dichotomy is such that I keep the thought where it belongs (viz., inside my skull), and instead – for you, dear reader, always for you – ask Cownie a few questions relating to his new gig and his comedy in general. Thus:

Ryan Cownie: Ah, Avalanche Comedy. It is a showcase. And the ceremony, yeah, we had a sword and everything.

AC: Are you Sir Ryan now?

Cownie: I guess – I wrote some title for it. I wrote the ceremony, too, so I don't know if it counts.

AC: Sir Ryan Cownie. Where are you from originally?

AC: And what's the best thing about Lincoln, Nebraska?

Cownie: The best thing? A lot. Everything.

Cownie: Yeah. It's like, uh, a college town? So it's pretty similar to here. Small. Like a kind of playground – until you hit 18, and then you go to jail.

AC: Especially if you liked Lincoln so much, why'd you come to Austin?

Cownie: Stand-up comedy, believe it or not.

Cownie: No-no-no. That doesn't seem financially smart, to go straight out there. And Austin's kind of an amazing scene, probably even better than – I mean, I guess you can't say better, they're more established up there. But Austin's a pretty good stepping stone, at least, for one of those. It's affordable, it's also a giant playground for adults here. Cody Hustak is from Omaha, Nebraska, and he decided to move out here – and I kind of wanted to leave, so I just tagged along.

AC: You knew him back in Nebraska?

Cownie: Yeah, we started out at the same time.

AC: Huh, that's really cool, like a mirror thing – since Cubas came with Habersaat. Seems like, more and more, Austin's becoming this place where stand-ups make their exodus to. And so, Avalanche – are you going to be doing anything different?

Cownie: Yeah, I haven't decided what yet.

AC: Weren't there bands there, when Cubas was booking it?

Cownie: There was, but it was a weird situation that I don't think happens often? People would come for the comedy and then leave when it was time for the band. So we're doing that maybe once a month, have a band. The general manager there is the one who usually picks the bands. So, I don't know. I wanna do something different at the beginning, but what? Live nudes? Burlesque? Cubas just used to go up and talk, when he started out as the host. And then we got day-drunk one day and went to this open mic and did this improv thing? Where we were teaching improv, me and Cubas, but we were actually just trying to sell meth through improv? And he was like, "Hey, you wanna co-host and do that every Monday?" And I thought about getting a co-host, too. Every other show has a co-host now.

AC: Speaking of which. Mac Blake, Joe Hafkey – everybody loves each other in this town – but they're your competition, right? Jazz Cigarette on Mondays?

Cownie: Yeah, I wanted to do some – it's too late now, because Cubas is gone, but I talked to Mac about how me and Cubas would host their show and they would host our show, some bizarro switch. But, you know, Jazz Cigarette is across town, so I don't know that we're really competing. They're not on our turf, so we'll let it slide. And that show's been going pretty well, too.

AC: How come you haven't won the Funniest Person In Austin contest yet?

Cownie: That's a good question. I don't do cocaine, so – naw, I don't think the judges do that anymore. I don't wanna slander the contest. I dunno. How has Cubas not won FPIA?

AC: I don't know that, either.

Cownie: I don't even know how they run that contest. Half of it is pizza managers judging it, and then the second half is Comedy Central, and now the third part is online.

Cownie: Yeah, one person out of the prelims got to skip the semi-finals based on fan-favorite votes. So they got to go straight to finals, something like that. So everyone just trolled? No – what's the right word? Hacked? Cheated? Because you can get a random IP, download an app, and just vote again and again, like, ah –

AC: Yeah, like when you stuff a ballot box. I heard that in that movie, All The Presidents' Men, when I was a kid.

AC: What would it take to get you to leave Austin?

Cownie: Uh … a reason, I guess? From here I'd wanna go to one of the coasts. And, financially, you'd have to kind of have, I wouldn't wanna go out there and just start all the way from scratch.

AC: OK, say it's a Michael Bay movie or whatever, and some mega-millionaire alien descends from 12th-dimensional Heaven and says "Ryan Cownie, you will now have whatever your Ultimate Goal of Comedy is." So – no medium steps, nothing like that –

Cownie: Straight to the endgame?

AC: Straight to the endgame. The biggest fucking thing. What is it? Is it a movie? Is it a sitcom series? Playing Vegas?

Cownie: It's probably … just a giant live show. An hour and a half of nonsense. No point at all, just fucking around – with movies and everything intertwined. [frowns] That's very vague.

AC: Well, it's a ridiculous concept of a question …

Cownie: Um … I'd say, when I get introduced – I'd have a hype man, of course – and then 50 lookalikes would come out on the stage. Which would be easy – just Generic White Guy. And then they'd disperse. And then it'd be a crowd that's also lookalike me. Just me – just all me.

AC: Ha! Like Being Ryan Cownie Malkovich. OK, this is more plausible: You've got a 45-minute spotlight. It's you, live, and an audience at Cap City, and all the honchos from Comedy Central, and everybody from Hollywood who has connections. And it's a regular set, you can do whatever you wanna do. But you have to have a ten-minute opener. Who do you choose as your opener?

Cownie: Oooh. Who would I choose? Ah, maybe Jared Hawley. Maybe fly in Seth Cockfield and Jared Hawley, to do a tag-team rap set for ten minutes? I'd like to see that. But – well, really? Cubas.

AC: And, finally – because most people want some kind of pigeonhole to put things in, how would you describe your humor? I mean, ah, what kind of comedy do you do?

Cownie: The awkward kind? Absurd, is what I always say. I'm an absurdist? Mac Blake said – and I wanted to use this sometime in my bio – "When Ryan Cownie's writing his set list, he writes Just Have Fun Out There."