Comedian Chris Cubas Gets His 'Movie Interruption' On 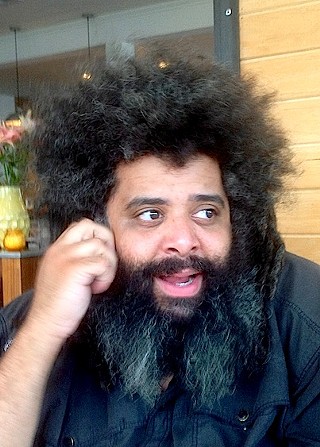 Don't be an idiot. This is not Reggie Watts. (by Photo by BRNNR)

Cat's been out of the bag for a while now, maybe, but we're telling you here because 1) we're already missing the big bearded guy, and 2) we've got Cubas' own take on the situation.

Tell you two things right from the get-go: The popular comedian will be back in Austin as often as he can, and his Avalanche Comedy nights at Holy Mountain have already been taken over by the man's, ah, well, let's say his protégé: Ryan Cownie.

Now let's get to the interview – in which Cubas disses San Antonio, praises Austin, and generally explains what's up with his new gig:

Austin Chronicle: OK, lemme see if I've got this straight. The Alamo Drafthouse Cinema is sending you to Kansas City to do a regular show in that new venue of theirs?

Chris Cubas: Well, they went to the Master Pancake people first, and they – I guess John Erler – don't wanna leave Texas. So what the Drafthouse is doing is licensing Doug Benson's "Movie Interruption." It's basically Master Pancake on-the-fly, and they're putting that in Kansas City. And Doug's gonna help promote it, he's gonna shoot a little intro video, and I'm gonna run it. I'm gonna be performing, I have to recruit the other people – the whole nine yards.

AC: So you're gonna be, like, a Doug Benson franchisee?

Cubas: On some level. I'm employed by the Drafthouse and not by Doug, but, essentially, yeah. And I'm gonna have to hire the other comics – at least two, because it's a three-to-four-man show.

AC: Will you be able to do stand-up on your own outside this new job?

Cubas: That's kind of the best part of this thing. Right now, it's gonna be one show a week, so I'm totally open to do as much stand-up as I want. And it'll be nice to have, like, a homebase with decent pay – and be able to afford to travel, you know?

AC: It's a good package, with insurance and all that?

Cubas: Full salary and benefits, yeah. And health insurance. Which is great, because my health insurance has been giving-a-fake-name-at-the-emergency-room for six years. And now – this hand? [He holds up his left hand.] This hand fucking seizes up on me, like five or six times a day? And I don't know why. But now that I have health insurance, I'm going to the goddam doctor.

AC: How'd you get chosen for his job?

Cubas: Tim League's seen me perform a fair amount of times. He judged the FPIA contest, and he's seen me enough in the last four or five years I've lived here. And he – he just hit me up out of the blue, really. I got a message from him, "Hey, you wanna go get a drink, I've got some business ideas I wanna talk to you about." And I'm thinking, yeah, he wants me to host some shows at the sing-along or whatever, and if I can get some free movie tickets out of the deal, I'll host the shit outta that. So we had a drink, and he was like, "How would you feel about moving to Kansas City?" And this is kind of a dream job, because it's something I would do anyway? So the ability to do it for a fairly significant amount of pay and benefits and that kind of stuff? Not bad. Do I wish I could do it here? Sure – I love this town. But Kansas City is cool, and I can live pretty much wherever. It's not like I have a wife or kids: It's just me. And Kansas City, well, part of the town's pretty cool and part of the town is not. But it's gonna be that way no matter where you go. And the new Alamo, it's in this old Vaudeville theatre that was built in 1919 or something – it's the same architecture – but they've fixed it up, put in the movie equipment … And there's a cool arts district there, a decent comedy scene, a couple of clubs. The town's good.

AC: I don't know from "Movie Interruption," but when Master Pancake's preparing a show they rehearse a lot, they pretty much burn their eyes out watching the same damned movie over and over again …

Cubas: Yeah, Master Pancake is a well-planned – yeah, see, I feel "Movie Interruption" is gonna be more of a mix of writing and improv. Because our idea is like, when there's a headliner in town at one of the comedy clubs, we can get him to come over and do a Saturday afternoon show – you know what I mean? Because I have those connections with comedy. And Master Pancake, they're always doing sketch, and they cut the movie down to a certain amount of time. But Doug's thing is that we have to watch the whole movie: No cuts, no whatever. So it's gonna be a whole different spin.

AC: Do you get to pick the movies, too?

Cubas: It's kind of a mix. Doug's idea right now is to do what he's already been doing with the show. Like "Ten Years Ago That Weekend," essentially – whatever was at the box office or released that weekend ten years ago. And it's a good mix of an old-enough-movie-that-we-can-get-for-cheap and a seasonal thing. Like, It's Christmastime and this is what came out at Christmas that year, or a summer blockbuster in the summer, or it's Valentine's Day and there's a romantic comedy, or whatever. It adds that thematic element.

Cubas: It's pretty open-ended. They're pretty committed to me – which feels good. They were like, "Okay, we'll go to Kansas City, try this for six, eight months, maybe a year. And if it doesn't work out in Kansas City for some reason, how do you feel about Denver?" And that'd be fine. So they're committed to the idea of the show and also to me doing it.

AC: So Austin's just gonna have to get by without you now? Out with the old, in with the new, just kind of kick us to the curb?

Cubas: [laughs] It's gonna be hard to keep me out of this town, because I fucking love Austin. I'm already looking for ways and reasons to come back, you know what I mean? Like, I hosted Fun Fun Fun Fest's Aqualympics, so I could get a free pass – just so I could come back for Fun Fun Fun Fest.

AC: What brought you to Austin in the first place, back in the – if it's been long enough to say "back in the day" already?

Cubas: I was living in upstate New York, in Kingston – small town, no comedy scene, except for my friends and I doing these DIY shows and whatnot. And we put together this thing called the Altercation Punk Rock Comedy Tour.

Cubas: Yeah – he's from my town. We knew each other there, and he moved here before I did. But he was putting together the tour, and we went out that first time and ended up here, at Fun Fun Fun Fest. And I essentially stayed. Like, I went home and packed my shit and moved back here – I was here within two weeks, because I immediately fell in love with this town. The comedy scene was really good – it wasn't nearly as big as it is now, but it was definitely taking off. It was like the perfect mix of small scene and super-talented scene, mixed with the right amount of industry attention. To be able to get in front of Comedy Central a couple of times a year, people from Letterman – you can do that in this town. And you know fuckin' Austin: They don't wanna hear bullshit. They don't wanna hear stand-up like, "Oh, my girlfriend makes me hold her purse in the mall" kind of shit. Go to San Antonio for that shit.

AC: So you're, ah, not that fond of San Antonio?

Cubas: That's the worst fuckin' town. Somebody was asking me about San Antonio the other day, because I'd opened there for Hannibal Buress, and the person I was talking to was like, "Well, why didn't he pick an opener from San Antonio?" And I was like, "Because there isn't one." There's gotta be fifty or sixty comics in that town – but anybody good moves here. Why would you stay there, an hour and a half away, if you could come here? It doesn't make any sense. If you have any sense, if you're any good at comedy, you come to Austin. I mean, I get the people who stay in Dallas – it's a real city, it's a real scene – but, like, San Antonio? San Marcos? Even Houston? I mean, Houston used to have a scene, and I guess there's some people there now, like they're trying? But all the clubs are closed, all the classic clubs are gone. Come to this town. Austin is where the comedy is.

AC: I'd apply that statement to so many other things, too – music, movies, theatre, visual arts. So let me play Devil's Advocate here: What's the worst thing about living in Austin?

Cubas: Seriously? It's that the good things are almost kind of a curse. Like, it's cheap and you can go party every night. So you end up partying every night. You know what I mean? You go out drinking way too much, because you can and no one says you shouldn't. It's that sort of blessing-and-curse.

AC: And the blessing of your new Alamo job comes with the curse of you leaving Austin – and ditching the Avalanche Comedy thing you've been hosting at Holy Mountain on Mondays. What's gonna happen with that?

Cubas: Ryan Cownie's taking over. He's a funny dude, and he's been co-hosting with me from, ah, pretty much since the beginning. We did a pretty ridiculous knighting ceremony in the last show – my last one. He's hilarious. And, for a host, you don't necessarily wanna have someone going up there every week and just doing stand-up. We wanted to have something a little more improv-y, just kind of messing around and being silly and weird? And Ryan is the king of that, he's the best at that – so he was the perfect choice.