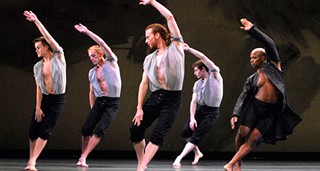 If you could capture the essence of childhood play – the boundless energy; the unself-conscious immersion in pretending; the relentless inventiveness; the sheer delight in creativity – and channel it through an adult, you'd have … well, you'd have Mozart, wouldn't you? You'd also have the Mark Morris Dance Group in Mozart Dances.

In their first night of a two-night stand at Bass Concert Hall through Texas Performing Arts, this singular contemporary dance company took the joyous, animating spirit of both that 18th-century Austrian composer and kids throughout all of history and used it to fuel almost two hours of buoyant, exhilarating dance. As Mozart capered, whirled, glided, and bounced through a piano sonata and two piano concertos, so did the dancers, the movements of music and bodies so spectacularly in sync that they seemed to have flared from the same creative spark.

You've witnessed kids on a playground, racing from slide to swing to jungle gym to hopscotch squares, going full-tilt at one activity, then abruptly breaking off from that to plunge into some new, inexplicably more engaging pursuit. Their actions don't appear linked to any thought process, just random impulses onto which they hurl themselves with abandon. So it appeared with the dancers, who might twirl and twirl, arms tracing an arc through the air with balletic grace, then stop suddenly and stride flat-footedly offstage. Or a sequence of leaps that would shame a gazelle might be followed by the dancers dropping to the floor and lying on their sides, like bouncing-off-the-walls wee ones who had finally exhausted themselves and simply dropped where they were standing for an impromptu nap. Much of the movement evoked the courtly dances of Mozart's day or the classical stage – typically executed with a startling virtuosity – but just as you would be seduced by the elegance of a step or a gesture, it would be followed by one that looked deliberately awkward or casually contemporary – say, a pigeon-toed stance with thighs together or two hands with fingers cupped and flicked toward the body in the universal sign for "back it up." The moves had the air of a kid in a school pageant who, either bored or mischievous, drops character and does something to amuse himself. Whether or not Morris actually had in mind a child's behavior in these choreographic moments, he nevertheless imbued them with a childlike playfulness that undercut the sobriety of a dance drawn from a titan of classical music, keeping it light, lively, human.

At times this sense of play conveyed a rare tenderness, as in Double, the work choreographed to the Piano Sonata in D major for two pianos. Dancers joined hands as if for a game of ring-around-the-rosy, but from their connectedness rose a sense of deep support for one another and need for union. As the circle spun, sometimes two dancers would fall backward, their backsides brushing the floor, but the rest of the circle would pull them to their feet and keep the group spinning without a lag or misstep. Frequently, one dancer would drop one hand and lead the rest, still connected, under the raised arms of the last two dancers in the line. But when this "London Bridge"-style passage was complete and the last two dancers lowered their arms, those separated hands found each other again and the circle re-formed. Again and again, this was repeated, the circle breaking apart, the dancers occasionally splitting off into smaller groups, but eventually, all joining hands again, re-forming the circle. It was a vision of hope, this beautiful symbol of unity, eternally turning like our Earth, breaking apart but always restoring itself, our hands always finding each other again to hold and hold up.

Through all of the dancing, lyrical and comical, came a purity of feeling, and it was exquisitely matched in the music that danced through our ears. The 34 musicians of the New York-based orchestra the Knights played with a delicacy and openness that made the notes spring from the sheet music like the dancers from the floor. And our own Anton Nel was at his nimblest at the piano, his fingers gamboling across the keyboard as if in a game of chase, coaxing forth impossibly elegant melodies and variations. Being Mozart, the music was anything but child's play, and yet Nel made the most complex material sound effortless – a breeze.

Some kind of breeze blew through Bass during Mozart Dances, and from it one felt that wonder of old, from the time before our perceptions of the world were filtered through obligations and cares, before we were weighted down by disappointments and cynicism and sorrows. It was a breeze open to all existence, to whims and caprices, to joining hands, to play and the unfettered joy that comes from indulging in it. Remember this, the breeze whispered. This is life. And it thrilled.