The Contemporary Austin gets $9 million for sculpture park 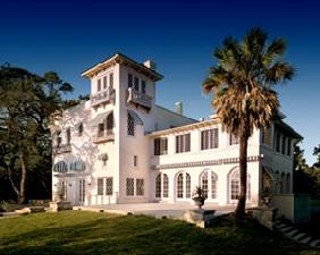 Seventy years after philanthropist Clara Driscoll donated her Lake Austin estate to the Texas Fine Arts Association to be used as a civic art museum, a multimillion grant to The Contemporary Austin will transform the grounds of Laguna Gloria into a garden for site-specific sculpture by prominent artists from around the world.

The announcement Tuesday of the $9 million donation from the Dallas-based Edward and Betty Marcus Foundation ensures that, as the museum forged from the merger of Arthouse (originally the TFAA) and the Austin Museum of Art (née Laguna Gloria Art Museum) charts a dynamic new course for itself, its historic home won't be left as just a relic of the past. Indeed, this landmark gift is designed to make the Contemporary Austin's West Austin site a spot where new art is constantly being showcased. Five million is designated for commissioning new artwork for the grounds, installations designed specifically for the environment around the 1916 Italianate villa – some permanent, but many not. The remaining funds will be split evenly between an endowment to cover conservation and maintenance of the Betty and Edward Marcus Sculpture Park, as it will be named, and a funding pool for exhibitions, public programs, and additional commissions for the park.

The full transformation of the estate into the sculpture park will take some time, as the museum is in the process of developing a master plan for the site's 12 acres, only three of which are currently in use. Museum Director Louis Grachos has indicated that a national search for a landscape architect to guide the design and redevelopment of the property will be undertaken. In addition, he says, even the earliest commissions made with the Marcus Foundation funds will take considerable time to be realized.

That said, it won't take long to get a glimpse of Laguna Gloria's future: On Sept. 21, the museum will debut a pair of new installations at the Lake Austin site, commissioned for it from artists Liam Gillick and Marianne Vitale. Vitale has repurposed a bunch of old railroad track switches into what might be a tribe of ancient, mythic figures wandering the meadows. Gillick, meanwhile, has added a colorful steel platform at the water's edge to contrast the natural with the manmade. Both artists will also be exhibiting work at the Contemporary's Downtown site in the Jones Center, 700 Congress, and all of it will be on view through Jan. 5, 2014.

Making the Marcus Foundation grant all the more impressive is that it resulted from a very competitive statewide search. After almost 30 years of dispensing grants to Texas visual arts organizations, the Foundation decided basically to put itself out of business. Its trustees chose to dedicate all of its remaining assets to a single project, but they felt strongly that it should be something transformational. After much discussion with organizations around the state, the Foundation felt the sculpture park at Laguna Gloria represented the opportunity it was looking for. In making the announcement Tuesday to a gathering of the Contemporary's supporters and community leaders, Marcus Foundation chair and Austin resident Melba Whatley spoke with understandable pride. This site, which has been so significant to this city during the past century, will now continue to be significant for at least a century to come.