What Can You Expect From a Central Market Cooking Class?

What we've discovered: Several things any foodie would love 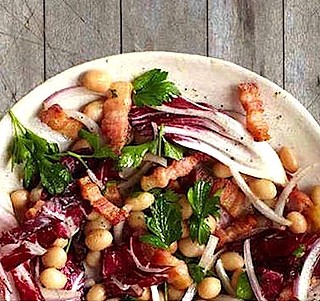 You: Seeing this cooked, then
eating this. With wine, most likely.

These classes have all the ingredients that matter.

We mean: Chefs that know what the hell they're doing, first and foremost. Chefs amiable enough and (at least) sufficiently socially skilled to present their methods of culinary creation in a fascinating, easily comprehended style. Chefs who are, sometimes, national celebrities due to their proficiency in those first two things. And of course there are the creations themselves – the food, oh yes.

And all of it occurring in Central Market Cooking School's second-floor kitchen-and-classroom, a bright clean rectangle of a space that's as outfitted with state-of-the-art video technology as it is with the most effective (and shiny!) culinary apparatus. It's the kind of environment that – when you're sitting there soaking up the knowledge and the foodie banter and devouring the various edibles – makes you feel like you're on the set, like you're part of the audience, of some intimate cooking show on The Food Network.

We think this is a good thing.

We think it's a really good thing if we're the Chronicle's Books & Screen editor Monica Riese, who recently attended the Central Market cooking class featuring Joanne Chang of the acclaimed Flour trio of bakeries, because then we're actual practitioners of the art ourselves and will be wielding the added knowledge in our own kitchen. But we also think it's a good thing even if we're the Chronicle's Listings editor W. A. Brenner – who will likely never attempt the menu options presented by Andrew Feinberg and Francine Stephens of Brooklyn's renowned Italian restaurant Franny's, except that, OK, maybe it's worth the risk of failure for the cooking-impaired Brenner to at least try to recreate the sublime panna cotta that chef Feinberg made the preparation of seem so easy?

"I don't know," says Brenner. "I mean, a couple years ago I was able to singlehandedly fuck up an attempt at Apple Brown Betty, which is about as simple as cooking gets. But the way Feinberg – who prepares all his food with an endearing add-more-salt compulsion – the way he demonstrated and explained the process, and the way the prepped-and-chilled-in-advance dessert tasted, especially after that second glass of wine, I might have to give it a shot. Because the ingredients are simple and few, right? And the preparation, as we saw in class, isn't that tricky. Right?"

Brenner's classmates, likely more replete with kitchen skills than the hapless editor, might eventually cook up the lesson's other offerings: Crostino of Whipped Eggplant & Anchovy; Red Rice Salad with Cherry Tomatoes, Corn, Cucumbers & Basil; Squid with Lovage Salsa Verde; Spaghetti with Chiles, Herbs & Ricotta. And those (less uncoordinated) others would be aided not only by the memory of what they experienced in class, but by their copy of the Simple Seasonal Italian cookbook that was included as part of the whole experience.

Although, bro, perhaps you should –

"No," insists Brenner. "I'm gonna get the ingredients together. I'm gonna chill out, thinking of that Franny's class, remembering how good it was to drink coffee and wine and listen to Francine recount the restaurant's origins, to watch Andrew slicing and dicing and sautéing and boiling, to partake of a casual and informative culinary experience right there in Central Market, a store that's awesome enough to begin with, even if they don't have a fancy-ass falconer to keep away the grackles like that new HEB at Mueller supposedly does. I'm gonna chill out, and I'm gonna give it a try. See if I don't, OK? See if I don't. It's panna cotta or bust, baby!"

Your mileage, reader, may vary; but we reckon you'd enjoy a class at the Central Market Cooking School even more than our somewhat loose-cannon of a journo did.

Coming up next at the Central Market Cooking School: Lolis Eric Elie – New Orleans native, story editor for HBO series Treme, and author of Smokestack Lightning – will present dishes from his new cookbook, Treme: Stories and Recipes From the Heart of New Orleans, at a special brunch event on Saturday, Aug. 24.