The Drink/Drank/Drunk Issue: Cast About

When Austin thespians go out to drink, here's where they go 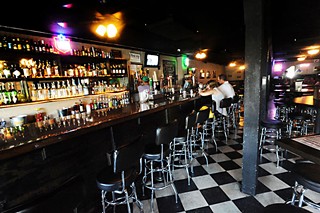 Show folk love their libations, and one of the enduring rituals of the theatre is the company going out together for drinks after the performance. Many a friendship and romance – and not a few unfortunate hookups – have begun in the bar while cast and crew hoist a few. Here, some brief reflections on places where local thespians have gone, and go, to drink.

Janelle Buchanan: The best place to drink after a show is somebody’s house, especially when Tim Mateer and John Hawkes (née Perkins) had the Flop Haus at 45th and Red River, surely the most ramshackle garage apartment that ever existed.

Lana Dieterich: Ahhh, John and Tim’s house. I remember going there once at the crack of dawn with Paula Perkins and Marcia Hardin before she was Marcia Gay Hardin to surprise them with breakfast.

Mike Sullivan: Those who remember after-show gatherings with Scottie and Gordon Wilkerson at the old Night Hawk on Congress just south of the river might recall that Gordon always insisted on picking up the entire check. That would include at least two rounds of drinks. In those days, I did not own a car, and many nights I staggered home from the Night Hawk.

David Jones: The Austin theatre bar has transitioned over the years. In the Eighties, it was the Cedar Door (first three locations). In the Nineties, the Dog & Duck Pub became a favorite hangout until it lost its hard liquor license. It then moved to Opal Divine’s Downtown. Now that we have so many theatre companies and a much larger theatre community, the hangouts seem to be associated with particular companies. Understandable, but having a common theatre hangout seemed to create a special bond that went beyond companies and individuals. We became one big family. I miss it.

Lowell Bartholomee: When I started working in town, the Dog & Duck was the place (and occasionally LaLa’s). It was certainly a place where you could go with your show people and very likely run into another show or two. It did add that communal feeling that is special to theatre and Austin theatre in particular. Then it was Opal’s Downtown, but that could be extraordinarily annoying due to being cramped and loud. And Opal’s South just doesn’t have the right vibe.

Katherine Catmull: I am really liking Gourmands right now, which is more or less convenient to the Off Center, Salvage Vanguard Theater, and the Vortex. It offers large platters of food, affordable drinks, and a big backyard with picnic tables where big groups can sit and argue.

Lowell Bartholomee: Lately, it feels like Gourmands is the place I’ve been the most with theatre folks, though that’s mainly because I’ve been hanging with Trouble Puppet/whoever is at Salvage Vanguard a lot lately. I suppose it has to do with location, but it also has a great deal to recommend it as a theatre bar. Lots of space inside and out. A pool table. A ping pong table. All the drinks you can think of, well-poured. And great food. To me, it’s the best candidate for taking the Dog & Duck’s mantle.

And then there’s always Cyndi Williams and Ann Hulsman’s Christmas get-together at the Driskill. Not what I would ever call a great theatre bar, because a great theatre bar should be laid-back, relatively inexpensive, and provide lots of options for forming and reforming loud conversation circles. And have great cheap food. But for that one night, it’s a perfect place to be and catch a wide array of Austin theatre people from all over the map. Which we need. As soon as Austin theatre gets too segregated in its drinking establishments, a little part of it will start to die.