Five Cool Things You Might Wanna Check Out This Weekend

Because there's good reason to celebrate, right now, isn't there? 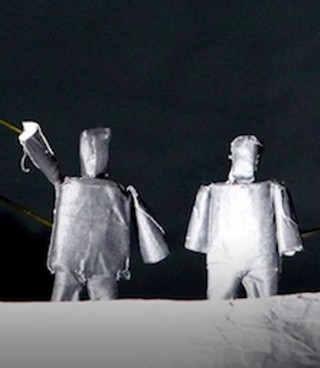 There! Right next to that bunch of cacti!

Well, yes, because we had to set some kind of limit … and we wouldn't want to go around breaking our own damn rules – you knowime sayin'?

1. PUPPETRY! Sometimes you want a single overarching narrative that stretches for an hour or so. Sometimes you prefer a curated collection of short works that delight & amaze in a series of thematic bursts over that same time. If you want the latter right now, and especially if you want to experience a fresh variety of modern puppetry styles, then you're in the right city at the right time: This weekend – two shows on Friday, two shows on Saturday – the Trouble Puppet Theatre Company and Glass Half Full join fully articulated forces to present the fourth Austin Puppet Incident, a smorgasbord of object-manipulation and stage artistry at Salvage Vanguard Theatre. [UPDATE: The 8pm shows are already sold out for both nights; reserve tickets to the 10pm shows while you can.]

2. COMEDY! As ever, there's a thick paste of funny ha-ha newly smeared along the walls of various venues throughout this keep-it-weird town. Improv, stand-up, sketch, you-name-it, all vying for your attention, and much of it worthwhile & easily affordable. But this weekend we're naming the Velveeta Room as a best bet, because Brian Gaar is the headliner for two shows on Saturday night. And we'd choose his gig, partly because it's impossible to read his Twitter feed without eventually laughing a soft drink right out the nostrils, even if he didn't have a decent opening act. But, since the show's opener is FPIA winner Mac Blake (of terrific, pro-level sketch troupe Stag Comedy), there's simply no way we could recommend any other comedy event more highly.

3. COMICRY! We mean: The sequential-artifact of the Shadow Healer graphic novel from Monofonus Press, the second issue of which odd Lynchian narrative by Morgan Coy, Karen Davidson, and Chris Chalik will be unleashed on the world at a party this Saturday night, fueled by free Dos Equis and propelled by live music from Love Inks right there in the Eastside's Tillery Park.

4. PENCILRY! In which we're glad to pimp the show opening at Tiny Park (so near Hillside Farmacy and other fine eateries), because their newest Drawing Annual features classical and postmodern approaches to the form, by artists Sara Frantz (San Antonio), Calixto Ramirez (Mexico), David Culpepper (Austin), Rob Verf (Buenos Aires/Austin), Sam Prekop (Chicago), and Claude van Lingen (Austin), and it might just make you cry with joy until your own cherished Dixon Ticonderoga is a waterlogged mess.

5. TERRORISM! In the form of an Irish terrorist, specifically, who goes on a spree of revenge after someone kills his fekkin' cat. This is Martin McDonagh's seriocomic and extremely violent The Lieutenant of Inishmore, now playing its final weekend as a Capital T production at Hyde Park Theatre. Tell you what: You haven't seen the likes of Grand Guignol until you've witnessed the final-act reveal of this twisted joint, and you'll seldom experience such fine, hilarious acting as Jason Liebrecht losing his shit because his beloved Wee Thomas is feeling a bit poorly. Blood! Fur! Shoe polish! Erin go Bragh!