Popular stand-up comic and cartoonist has died at age 57 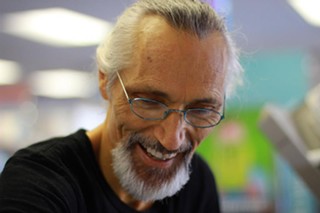 Senses of humor and artistic outlooks don't come much weirder – or more Austin – than Joey Waldon's. During his days as a Velveeta Room regular and local cartoonist, Waldon routinely took the most ordinary subjects and gave them an offbeat spin that that tickled the brain just as much as the funny bone. Alas, that wonderful talent has left us.

Waldon died Sunday, May 12, from pancreatic cancer. He was 57.

Waldon belonged to the late-Eighties generation of Austin comedians who came of age in the early years of the Laff Stop (now Cap City Comedy Club) and the Velveeta Room. The latter, originally housed in a former topless bar a few blocks west of its current location and every bit as cheesy as its name, served as a clubhouse for the aspiring stand-ups of the day, one where they would hang out deep into the night, talking, drinking, and continuing to perform for one another. The space was being leased by Esther's Follies co-owners Michael Shelton and Shannon Sedwick, and in those days, Sedwick recalls Waldon as "the crazy grandfather of the group, quirky, eccentric, way out there in his style, but loving and supportive of all styles of comedy." Writer Spike Gillespie remembers that, during these after-hours sessions, Waldon "in his never, ever dirty Chuck Taylors and his never, ever wrinkled anythings would get onstage and rave about his dysfunctional family in sick, hilarious detail. And if he was really wound up, he'd keep going even after [manager Beau] Bahan shut off the mic."

But Waldon was also a comic who made comics. His one-panel absurdist cartoons – typically featuring some loopy play on words that he would illustrate in a style so flat and angular as to be almost Cubist – were well-known around town, thanks to Waldon's marketing of them on T-shirts and cards. And from late December 1988 through August 1990, they ran weekly in the back of the Chronicle.

Waldon was part of a mass exodus of Austin comedians to the West Coast in 1992, but he didn't stay out there long and he never made comedy a career. As time went on, he devoted more attention to his art, and images of his home in Dallas – where he moved in the late Nineties to be close to his daughter, Maxx Thompson – show every inch of wall space, floor to ceiling, covered with paintings that he had made.

But his ties to Austin comedy were lasting, especially in his friendships. When Brian Malow, one of the old Velveeta Room crowd, was getting married in 2012, he flew Waldon up to San Francisco and got him ordained online so Waldon could officiate at the ceremony. He would periodically return to town for Velveeta Room reunion and the rare gig. And during his illness, Waldon received much support from his comedy pals, especially John O'Connell, Ron "Tater" White, and Cindy Wood.

In a community of people who could be sharp-tongued and sardonic – indeed, whose job is to be that way – Joey Waldon was beloved. Kerry Awn may have described him best on his Facebook page: "A prince amongst clowns. An artist amongst copiers. A force of gentleness." He will be missed.