The Very Last Night at Wardenclyffe

The Eastside art gallery and cultural powerhouse is moving on 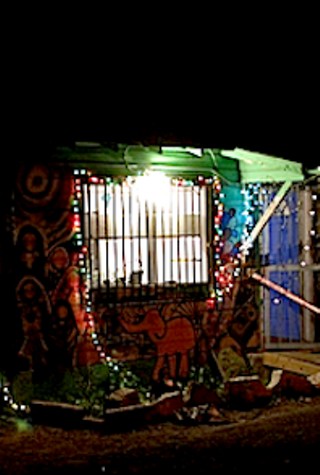 Even Nikola Tesla, that genius and master of strange forces, had to leave us eventually. And now so does the Eastside artistic epicenter named after his laboratory.

The gallery, co-founded by Katie Rose Pipkin and Olivia Pepper, has been host to a panoply of visual and musical treasures – besides being associated with acclaimed Raw Paw magazine – throughout its just-over-a-year's worth of existence.

"The Art of Moving Books" most recently adorned Wardenclyffe's interior, and before that, "Basements Were Rooftops" for Fusebox Festival, and the earlier group shows "Minimalism Rodeo," "Summertime of the Dead," "Karmic Trash Debt," and others. Among the bands bringing delight to the venue's walls and yard, such sonic gems as Shardz, Mechanical River, Flip Cassidy and the Junkyard Gospel, Sour Bridges, and the Ridges flashed their facets of songsmithery into the night.

"At Wardenclyffe," says Olivia Pepper, "we moved into and renovated a tiny old house that had been abandoned or misused for several years, and we were forced to make the most of what we had. That meant working around old boarded-up windows, exposed wiring, messed-up floors. And, while that aesthetic was charming in certain contexts, it also pulled focus from some of our more subtle shows or works that required a truly blank canvas."

Now a combination of growing pains and rent increases are driving the passionate collective onward. Of their plans for the future, the official press release says: "Our aims are to temporarily rest up at the White House Ranch, a similar let's-take-over-an-abandoned-house-and-make-art project, and then, in fall/winter 2013, move into a larger, more permanent home."

Before they move on, though, there's time for one last show, one last party, called "Saying Thank You," this Friday night, May 17th.

And, after that … well, "No matter where you go, there you are," as Earl Mac Rauch said in the voice of Buckaroo Banzai. And so the collective will continue along its artistic path. Of course it will: That much, and the reasons for it, would be obvious to any artist. But maybe let's put a finer point on it here. Why, Ms. Pepper? Why all this artful industry? Why not just work your day job and then relax with television and idle conversation over beers with friends?

"Because," says Pepper, "art is a story that needs to be told, and it sounds different whoever is telling it, and each revision is worth listening to. Because witnessing, fostering, facilitating, and making art is what makes some of us tick, because without engaging our community and putting energy into this right-brained reality, the moments we do have for beers and television just feel empty. Because I believe that the practice of creation evolves alongside a knowledge of self-worth – as long as people feel like they can make something, or be moved by something that has been made, they feel like they have some measure of value in the world. As a concept, that's pretty overwrought, but it is how I feel and I wouldn't be comfortable feeling that way if it weren't for the fact that I've seen this be true throughout my life, but especially over the past year at Wardenclyffe Gallery. Because art is, in some way, saving the world."