East Austin Arts Puts It Into a FRAME This Weekend 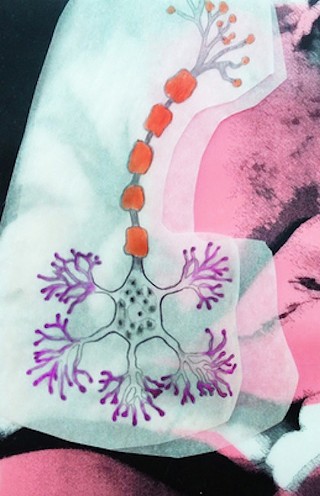 We invoke mother-of-pearl for more than reasons of linguistic shenanigans here: Also because the world is everybody’s oyster – at least as far as involvement in the creative arts is concerned in the deepest heart of Austin, Texas.

You know it doesn’t start and stop with the EAST and WEST Austin Studio Tours. You know there’s always some manner of vast industry occurring, all sorts of projects being fomented, too many people hunkered over beers at Gourmands or coffee at Bennu and waxing ambitious about their next possibly city-funded, maybe Kickstartered, most likely auto-bootstrapped foray into the world of creative self-expression.

Yeah: Especially when the movers and shakers associated with Big Medium are involved.

And especially if Big Medium joins up with Co-Lab Projects and Tiny Park and MASS Gallery to form a coalition called East Austin Arts.

And double-especially when this Saturday, May 18, features a quadruple exhibit-opening and artist talks and film screenings and live music and more from noon until midnight.

Go ahead, enjoy Fahamu Pecou’s “All Dat Glitters Ain’t Goals” and the “F. R. Etchen Collection” at Big Medium’s new Canopy space. Attend the Scar Party and see Brooke Gassiot’s “The Stories Our Neurons Tell” at Co-Lab. Feast your brain on Joel Ross’ and Jason Creps’ “Not How It Happened” at Tiny Park. Don’t miss the nationally sourced group show of painting, drawing, collage, and sculpture in “Wally” at MASS.

And while you’re there – before or after ogling the artwork and marveling at the wonders some people can commit with ordinary matter and berating yourself for not doing enough creative work of your own and going back to the snack table to see if there are any of those little sausage things left – ask about what’s going on.

Engage some of these local makers in conversation. Find out who’s doing what and what opportunities there are for newcomers. Get involved with what’s happening, artwise, in this city – whether as an active participant or a supportive hanger-on or even just a scenester who might buy a piece of artwork once or twice a year but always brightens a room with that fancy mustache.

Because: What the fuck good is an environment if you’re not immersed in it?
And how much better will that environment be if you are?

(Ask yourself these questions to get yourself out the door, if you have to, friend.)

There is much to be enjoyed.

And we’ll see you ‘round the town.