The cynical comic was the consummate wit at the Stateside

"That joke got a standing ovation in Houston."

Let me just come out with it: Todd Barry is my idea of the consummate wit. His conceptual stuff is, as it was at the Stateside at the Paramount on Wednesday night, invariably smart, edgy, sarcastic, and brilliantly observed. Yep, all those adjectives and get this: completely devoid of scatology or raunch, if you can imagine that.

The delivery is soft-spoken, a confident cynic's deadpan – you have to pay attention, sometimes even strain to hear. If a joke fails to launch, Barry might parry the crowd with a "This is edgy stuff, people," or "What? You guys didn't want to laugh at that? That joke got a standing ovation in Houston." A savvy way to sidestep the momentum-slowing thud of a joke gone awry .

Hard to describe what it is that makes Barry's observational humor so spot-on, short of reprising the material. He kicked off his Moontower show with the perfect comeback to the thumb-in-the-eye that was his placement at the intimate Stateside theatre next door to the crowd-accommodating Paramount, where the masses were straining at the barricades to get at Bill Hader. Barry reported that he'd just seen a Tweet that the Hader show was full, but there was still plenty of room next door for Todd Barry.

Barry covered a lot of ground last night, some of it new territory, some oldies but still exceptional goodies. He'll appear several more times during the festival. Highly recommended. 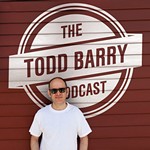 Moontower Extra: More Talk With Todd Barry
The rest of the 'Chronicle' interview with the deadpan comic