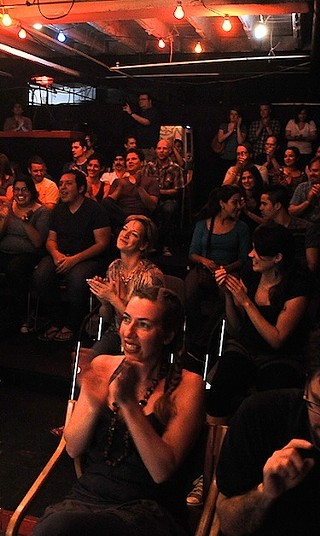 Usually, the ideal – the comedy-gold standard – is that the audience will just STFU and laugh, right?

The Heckle Factory show at Austin's New Movement Theatre encourages the audience to snark out loud, to give those stage-seasoned laff-mongers what for, right there in the middle of a set. They've done it a few times before, and they're doing it again this Friday night at 10:30pm. And yet there've been only rumors of resulting fisticuffs from that basement scene Downtown.

Still: Who comes up with shit like this, we wonder? Who in their right mind would –

Preston: Yeah, after I saw the success of my buddy Lane Krarup's Never Ending Comedy Show at New Movement, and Rob Gagnon's Block Party, I wanted to produce a unique show that would fit into the schedule. My original concept was called, What The Heck?, but after learning about the history of heckling, I named it The Heckle Factory. There's definitely a place for a show like this in Austin. And I'd be lying if I didn't give credit to the idiots that ruined the chance of Dave Chappelle ever coming back here. A heckling show: The audience needs it, the comics crave it. Ours is refereed by Lawson Bennett and the late Sam Maspero. And as long as no tears are shed it's all in good fun.

Preston: The show is an experiment of sorts.  Six or seven comics stand before the crowd and try to deliver their set while the audience heckles them. The first 90 secs are heckle-free, and then the Heckle Refs blow the whistle to allow for the heckling to commence. Most of the funny comes from the audience, and the comics' reaction to the heckles. The audience is kept in line, more or less, by the refs. Audience members can be put in a virtual "time-out" … but this rarely works.

AC: In wrangling the stand-ups for this show, have you found some who passed on it because they didn't want to deal with the heckling, and maybe some who were like "Hell yeah, I love this, bring the fuckers on!" …?

Preston: It's about 60/40.  Sixty percent of the comics are excited by the challenge.  Where else can you go and get in front of this type of crowd? I explain to the comics that it's basically a comedic bull ride: Just like the bull rider needs to stay on the bull for eight seconds, the comics have a five-minute set that they have to deliver while the hecklers try to buck them off the bull.  Forty percent say that it's not their "thing" or they "do only traditional stand-up comedy" or that their pussy hurts.

AC: When do you think, outside of this show, heckling should be allowed or encouraged?

Preston: Never. Laugh or shut up. Nobody came to hear about your unimportant life. The pain and rejection that one has to go through before they get the courage to get onstage has been compared to the courage it took Harry Connick Jr. to chop his arm off when it got crushed by that boulder in 28 Days.

AC: What do you do if you're heckled? You have any stock responses?

Preston: Sometimes I ignore it if it's irrelevant. If you validate it with a response, it welcomes more. But if you're getting heckled it's because you're struggling onstage, you're delivering controversial material, or you've given the audience the feeling that you're weak and they can push you around. But the power is with the person with the louder voice – and the microphone is helpful with amplification.