If baseball is America’s pastime, then football is her guilty pleasure. Sure, it’s thrilling. But it’s also really fucking violent. It encourages players to muscle through concussions, and it encourages them to hate. Colossal, the spectacular play premiering at the Cohen New Works Festival, tackles these skeletons head-on.

It’s more of an event, really. As playwright Andrew Hinderaker said in a talkback after last night’s performance, Colossal is “intimate and epic at the same time.” He’s not exaggerating. Upon entering the performance space – a vast echoing studio in the prewar Anna Hiss Gym – audience members looked at one another and mouthed, “Damn, this is exciting.” Actors who look more like skinny football players ran the length of the room and caught balls and yelled and whistled and did push-ups, performing choreographed drills to the beat of a miniature drum line. We might have forgotten that we were at a play, not a football practice, save for one man dancing slowly, alone, through the glistening players.

Suddenly, as the team ran a play, they froze in mid-tackle, and a man in a wheelchair rolled through. This is Mike, played by Michael Patrick Thornton, a terrific Chicago-based actor who is disabled in real life, too. We learned that he’s constantly replaying an image of his younger self (Will Brittain) perform the act of recklessness that crippled him for life. Football was his passion – and a plague: Not only did he get hurt, but his dancer father (Steve Ochoa, the lone figure from the opening) disapproved. “I was the only son in the history of the United States,” Mike declared, “to disappoint his father by choosing football over dance.”

And so the story goes, in 15-minute quarters and a halftime show almost as good as Beyoncé’s. With direction from Will Davis, choreography by Andrea Beckham, and additional movement by Jeff Simon, Colossal is a shining example of the excellence that a department of theatre and dance can create when everyone works together. By far the most physically demanding play I’ve ever seen, it’s also a deeply character-driven work, especially when it comes to the cocky, impulsive younger Mike, impressively played by Brittain. (Where did this guy come from, a PacSun ad? Those abs belong in a magazine.) Hinderaker brings his love-hate relationship with football into conversation with other themes: repressed homosexuality, the narrow macho mindset, the danger of living in the past, the emotional and physical difficulty of rehabilitation. Colossal doesn’t denounce football – far from it. “Everybody loves football, even if they don’t know it yet,” says young Mike. The characters describe being hit as a blinding white light, searing pain, and then pleasure: “I’m not dead.” But football is complicated. It’s a compulsion, a joy, and, as Colossal makes us vividly aware, it’s also a game that hurts people. 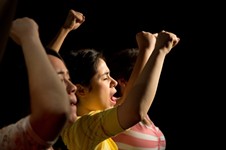