Voice for the Missing Women

Call to action: 'The Women of Juárez' (Courtesy of Josh Rasmussen/UT Austin)

Juárez: Once it made me think of drug cartels and illegal immigrants. Now I think of daughters and mothers, of hundreds of unsolved serial feminicidios and the MISSING WOMAN posters plastered across the city for two decades, thanks to the heartrending and absolutely essential The Women of Juárez at the Cohen New Works Festival.

Admittedly, I’m not as thorough as I could be when it comes to keeping up with world news. But my boyfriend is, and, when I returned home from last night’s performance emotionally bewildered, trying to explain to him the horrific violence I'd learned about, I found myself angry when he asked if the play was fictional. Even he hadn’t heard of the deafening wave of brutal femicides that arose in the mid-Nineties after NAFTA allowed internationally owned factories – more radical folks might say “sweatshops” – to corner the low-wage labor in border towns. It’s hard to say what the connection is, since the law is unresponsive, and the purpose and perps behind the murders are unknown, but many of the victims work in these maquiladoras, which provide little in the way of protection for their most vulnerable employees.

UT Department of Theatre & Dance undergraduate co-playwrights Isaac Gomez and Bianca Sulaica have fearlessly and tenderly gathered this crisis into their arms. They and other collaborators have visited the colorful houses in the hills across the border from El Paso and returned with stories from the lips of mothers and sisters. Their theatrical product, The Women of Juárez, is devastating and beautiful. The ensemble of 10 Latinas moves smoothly through scenes featuring Yoli (Karen Alvarado), a mother whose daughter is lost; Brenda (Christen Perez), a young factory worker; and Blanca (Sulaica), a sister missing a sister. The scenes are tight and the story subtle until the explosive final few moments that made me and most other audience members weep. But we all cried silently, because we didn’t want to detract from Alvarado’s raw breakdown or Sulaica’s break-your-heart speech of realization.

Musical interludes (namely Selena’s “Como la Flor”) and a bit of magic realism – a dancing spirit called Doña Maria (Karen Rodriguez) – add moments of levity and grace. But The Women of Juárez is a vigil and a call to action. “A generation later,” says an activist (Lisa Martinez) in the play, “these women continue to disappear. Why isn’t anyone doing anything?” These UT students are. 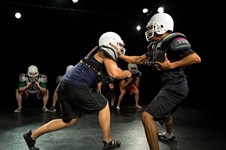