Dance practice: An Austin Energy lineman who could be part of Allison Orr's next big project (Courtesy of Forklift Danceworks)

With her 2009 work The Trash Project, Allison Orr managed the remarkable feat of making us see the daily routines and movements of Austin's sanitation workers and their equipment as dance. Now, the award-winning choreographer is planning to do the same for the employees of Austin Energy.

Yesterday, Orr's company, Forklift Danceworks, launched a Kickstarter campaign for its next production, one that has Orr collaborating once more with a city department, municipal workers, and big, honkin' machines. Scheduled for September 21 & 22, this currently untitled dance will be performed outdoors, and its scale is no less imposing or impressive than that of The Trash Project: a fleet of bucket trucks with cranes that can reach more than 100 feet in the air, maneuvering around 20 utility poles that will be climbed by more than 50 linemen, whose high wire repair work will serve as the basis for Orr's choreography and whose personal stories will be woven into the work.

In her Kickstarter pitch, Orr calls lineman "true cowboys – people who are willing to do whatever it takes, in all kinds of weather and at great personal risks, to make sure you and I can turn the lights on every day. These men are also big talkers, characters, risk takers, and – believe it or not – dancers. All of their work relies upon highly choreographed movement. One wrong move and someone could die. And they rely upon each other – moving like a highly trained group of dancers – to make sure the work gets done right every day."

Composer Graham Reynolds will provide the score for this new dance, as he did for The Trash Project, but his music will be performed by the Austin Symphony Orchestra under the direction of Maestro Peter Bay. Indeed, the Kickstarter campaign is all about paying for the musicians. The $15,000 goal is intended to cover half of the cost of the orchestra. It's encouraging that the campaign topped 40% of its goal in the first 24 hours, but one can never assume that a crowdsourcing effort will make its nut. The campaign continues through April 18. For more information, visit Forklift's Kickstarter page. 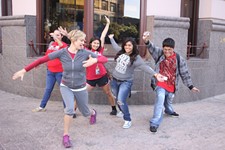 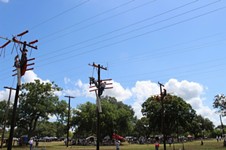