Steve Miller brings the magic at Texas Medal of Arts 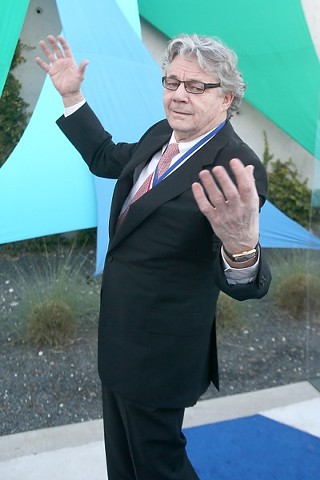 Steve Miller had to sing for his supper, so to speak, at the 2013 Texas Medal of Arts awards Tuesday night. The Lone Star rocker was one of this year's dozen honorees, but he was also conscripted to play during the two-hour-plus ceremony at the Long Center. That proved lucky for those present, as his three songs were highlights of the program.

Not that the ceremony lacked for excitement. The opening with five Blue Lapis Light dancers working silks the full height of Dell Hall was breathtaking, and proved that choreographer Sally Jacques and her aerial dancers can create extraordinary movement inside the Long Center as well as outside it. From there, the show moved from the ridiculous – the Art Guys decked out in white jumpsuits covered with cymbals bumping against each other while the "William Tell Overture" played on a boombox – to the sublime: 2004 Young Master recipient Charles Yang on violin, his bowmanship both dazzling and dizzying as he tore through a classical piece that I should have been able to name – Paganini? Czardas? Brahms? – but couldn't, then segued into Michael Jackson's "Billie Jean." Less pyrotechnic yet still virtuosic in their own ways were hometown heroes Jaston Williams and Joe Sears, receiving a medal together for their theatrical work but given solo turns in the ceremony, Jaston telling uproarious tales from the duo's many tours of Greater Tuna and their sequels, Joe making a last-minute appearance as Tuna's Aunt Pearl to roast politicians with a handbag full of one-liners.

Still, the program just couldn't find a rhythm. Despite the best efforts of emcee Chris Harrison (ABC’s The Bachelor), whose reminiscences of Texas and light quips struck just the right tone, the numerous shifts among the videos about the medal recipients, their heartfelt acceptance speeches, and assorted special appearances – such as T. Boone Pickens, Emmitt Smith, and Jerry Jones paying tribute to Individual Arts Patron honorees Gene Jones and Charlotte Jones Anderson – seemed to lose whatever momentum was worked up. The show rather lurched along and took longer than it should have, leading a number of people in the already restless crowd to seek the exits well before its finale.

But when Miller was onstage, the ceremony found a groove, and it made the program's hiccups fade away. Miller's first two numbers gave an expected nod to his band's greatest hits catalog – "Fly Like an Eagle" and "Abracadabra" – but there was nothing perfunctory about his renditions of them. Particularly with the former song, Miller took his time, time, time, giving solo breaks to other players onstage – including Asleep at the Wheel frontman and 2011 Texas Medal of Arts winner Ray Benson – to create what sounded like the kind of long LP cut you'd hear on FM radio back in the band's early Seventies heyday. On top of that, Miller infused them with more bluesiness than I ever recall hearing in the Top 40 versions. That quality was fully unleashed at the conclusion of the show, when Miller joined Benson back onstage for the Buddy Miles/Mike Bloomfield classic "Texas." The 69-year-old laid down licks that would have made T-Bone Walker – the man who taught little Stevie Miller how to play single-line solos – proud and crossed generations by jamming with Yang, who was as adept at improvising blues on his fiddle as carving out note-perfect classical. It was, as emcee Harrison note, a bridging of past and future in the present, and damned if it didn't fill you with hope about the state of the arts in Texas.

The other individuals and institutions honored with medals by the Texas Cultural Trust this year were: