And these good shards aren't hard to find, man 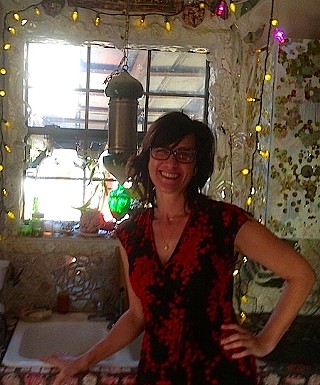 She makes a broken tile holy. (by PHOTO BY BRNNR)

Every time Stefanie Distefano breaks a mirror, somebody's in for years of good art.

Maybe that somebody is you – because you're here in Austin, where Distefano has created an array of public mosaics built from shattered mirrorglass and the broken fragments of her own colorful ceramic works. Maybe you've seen the Virgin and the Gandhi on the exterior of East First Grocery at Cesar Chavez & Comal, a double mosaic recently awarded Best Of Austin in the Chronicle's annual celebration of all things local and laudable. Maybe you've experienced the grounded glories of the El Paso Street Bridge, the Phoenix Wall on Live Oak Street, the sun-dazzled Flamingo Mitote at Patterson Park. Or maybe you know some of the people who've commissioned the artist to enhance their homes, their gardens, their driveways, and so your mind's still bright with the lucky memory of tilework you've witnessed there?

We recently visited Distefano in the home studio she calls the Flaming-O Ranch, the home studio that the former Army brat's owned since moving to Austin from North Carolina in 2003, and here are five things we learned within that ceramic-and-glass-embedded wonderground:

"The very first thing I did was that piece you took pictures of when you walked in," she says. "Mostly it's the remains of dishes, like there's a lot of old deviled-egg platters and the other things I was making at the time. They were broken and kind of just thrown in the backyard. I can't believe that's my first mosaic project – it's so big – but once you get into it, it's really not that overwhelming. I think if I think about them beforehand, and how big they are, I might not've done it. So I'm glad that I jumped into something giant to start with."

2. The El Paso Street Bridge was her first public mosaic, and it was almost destroyed by the city the week it was completed.

"Yeah, that was definitely one of my first pieces," Distefano says. "And it never occurred to me to ask the City, I just did it. It's that little rinky-dink bridge right next to my house, so I did it, and then I went on vacation. And the Jewell was staying at my house. And somebody complained to the City that the bridge wasn't handicapped-accessible. That was the complaint that was filed – and it wasn't, no, but the bridge wasn't that way to begin with. But the City sent somebody out to tear it down, and the guy … just couldn't do it. And while he was standing out there, I guess wondering what to do, my neighbor Mr. Swenson from across the street came over and had a conversation with him. And the guy left, and Mr. Swenson told another neighbor on the street. And somehow all these notes started getting posted down there, people saying things like WE LOVE OUR BRIDGE – AND WE VOTE and all this great stuff. And I'm out of town while this is going on, and the Jewell is calling me, and he's like, 'Yeah, it's crazy, I don't know what's gonna happen.' And then Chuck Herring and Ginny Agnew, a couple of lawyers, came and surprised me in the studio and asked me if they could get behind the whole issue. They're the people that got Vince Hannemann off from the Cathedral of Junk thing, and they're just great folks to know if you've ever got a weird art issue. And, I swear, the next day the complaint was dropped – and that was that. And, you know, I think it's wild that a complaint gets so much instant validity, like there's no common sense involved in looking at it: It's somehow real because it's a complaint. Somebody should actually look at the situation, think about what's going on."

3. The Virgin and the Gandhi weren't at all what she was initially planning to do.

"The Gandhi was part of the Payphone Revival Project that Bridget Quinn did," says Distefano. "And I applied for the East First Grocery spot with this concept of doing something from that Tommy Tutone song, "Jenny/867-5309," because I thought that would be really fun for around a payphone. But the guy in the store, Sam Lodhia, he didn't get that – he didn't know the song at all – he was like, "Ah, I don't want people dialing that number." And he's an Indian man, and he said his family was really into Gandhi. And it was the anniversary of the assassination of Gandhi, and I'd just done the MLK March, and Gandhi and Martin Luther King are so close in my mind – so it was the perfect solution. And there had been a Virgin Mary on the other wall, the Virgen de Guadalupe, because there used to be a ton of gang activity around that corner, and community members had painted the Virgin to watch over people. And Sam had painted over it when he bought the store, and he said he'd always felt bad about doing that, so he asked me if I could put it back up. So that's how she came to be there next to Gandhi."

4. The artist makes a living – well, almost – from her creative work.

"I do have a part-time job as house manager up at the Paramount Theatre – I work once or twice a week, making eleven bucks an hour or something like that – but it's pretty much just income from the mosaics. And I do a lot of other things for people – bathrooms, showers – little pieces for people who have, you know, a neighbor that's into bowling balls and peace signs, or other little quirky things that somebody wants made. I also do a Christmas show every year, and I make stuff for that. And I do this Tuesday Art Night with a bunch of folk, and I end up making a lot of functional pieces on those nights. But, you know, making stuff that you think is gonna sell because "Well, I love it," and then it doesn't sell – that seemed to happen a lot. So now I do that only if it's something I really want, or I'm making it for a gift. Or when people ask for something."

"I don't know where I'm gonna do it," she says, "but I know that I want to do the Led Zeppelin "Swan Song" guy, the man with the wings behind him. This beautiful male angel, lifting up and bringing everybody up with him: I want to do that piece to honor men. I have a million ideas about what I want to do with it, but it seems to me in this time that women get all the focus – young women – and sometimes I wonder if men get the attention they need and deserve. I have an idea for a piece that kind of bleeds a couple of things together, doing The Last Supper, with that angel on either side, holding up the table. It gets a little complicated with all the ideology in there, but, yeah just a single ten-by-ten wall of just the Swan Song guy would be amazing – but maybe he's incorporated into other things too. And another thing I want to do – and this is something I'm really saving up mirrors for – is under the bridge down here on El Paso. I've started to work so that it meets under the road, but I'd like to do, like, a giant disco ball under there: All mirror, everywhere. And I see places around town all the time, places that really need some work done. It's ridiculous that I even bring this up, but that whole intersection of Lamar and Ben White, all that concrete, God, I would love to do something there. It's usually things like that, like at the end of Cumberland? There's just a concrete wall with weird things, it's gross and ugly, there's a bus-stop and it doesn't look good at all. I'd love to do something there – in fact, I applied once to get a grant to do something there, but I didn't get it. And those buildings Downtown near the University, I guess it's government buildings? Maybe it's what houses the air-conditioning units or something? It's concrete and it's the ugliest thing I've ever seen and it's huge and it's Downtown. Somebody needs to trick that out – and I'm just the person to do it!"