A Butterfly's Life, From the Inside

Beautiful 'Farfalle' allows kids to step into a bug's world

How often do you get a chance to outrun giant caterpillars? Or make music by stepping on chrysalises as big as basketballs? Or climb inside one the size of a tent? The kids who see Farfalle at Scottish Rite Theater do, in an enchanting show that combines dance and high-tech projections to follow a butterfly's life from egg to winged glory.

Scottish Rite Executive Director Emily Marks imported the performance from Italy – "farfalle" being Italian for butterflies – for a two-week run that ends Sunday, Feb. 24. (The remaining performances are at 4pm Saturday and 11am, 2pm, and 4pm Sunday.) The 45-minute production from Teatro di Piazza d'Occasione (Compagnia TPO) has no characters to speak of, simply two dancers who move gracefully across a long mat that serves as the playing space and silently invite children to join them on it as the piece progresses through the various stages of the insect's existence.

Audience members sit on the floor on either side of the mat, which at first appears to be a screen, with images projected on it. But very quickly, it becomes clear that movements across the mat can affect what happens on it. Eggs the size of dinner plates appear, and when a dancer steps from one to another as if stepping from stone to stone, the contact of her foot sends a large ripple of color outward from the edges of the egg. After caterpillars emerge from the eggs, they follow footfalls, zipping after the humans like hungry ghosts in a Pac-Man game. When the the bugs move on to the chrysalis stage, each chrysalis on the floor produces a musical tone when stepped on, and moving from one to another can produce a simple tune. Special bracelets on the wrist allow every movement of one's arms to create trace movement on the floor, colored shadows like the after burn images left by sparklers. In one of the most lovely and lyrical images transparent fabric wings are unfolded into a rounded tent in which one of the dancers and a child rest.

Yes, at every step of the journey, children are invited to participate, to step on those eggs and chrysalises and make those multihued trails across the floor – a few at a time, but dancers Martina Gregori and Angelica Portioli are sensitive to extend their silent invitations to as many different children as possible over the course of the show. (Their gentle treatment of their charges is, in its way, as sensitive and full of beauty as their dancing.) Some kids are shy, some too young to comprehend the cause-and-effect quality of their actions on the visuals and sound, but the participation of the young ones, no matter what they do, is an essential element to the specialness of Farfalle. They aren't mere spectators of this theatrical event, kept apart from the stage. They're able to enter and be immersed in it and affect it, even if they don't realize the extent to which they're doing it. It would still be a beautiful show if it were simply the dancers interacting with the mat and showing us those changes, but by bringing the children into it, Farfalle invites its audience into the lives of the butterflies it celebrates, brings those young ones into the natural world through a magical representation of it. It's an important step toward recognizing the beauty of nature and its creatures – and their effect on them – when they step out of that theatre. 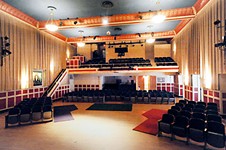 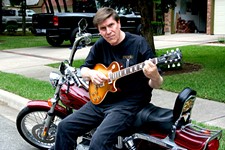