This Weekend's Your Last Chance to See the Human/Animal Hybrids 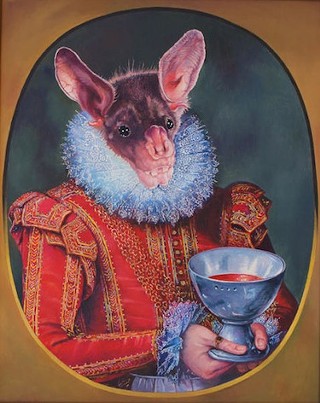 Malcolm Bucknall's falling dog is on the Jesus Lizard t-shirt I inherited from my ex-wife.

I know it's Bucknall's falling dog because I see the album art framed on the wall of the staircase leading up to the studio behind his and his wife's home in Austin's Rosedale neighborhood. He's got a show up at Wally Workman Gallery on West Sixth right now (and for just one more day), this amazing artist whose works have also been used by the Houston Grand Opera and the Folger Shakespeare Library.

"There's another one for The Jesus Lizard," says Bucknall, pointing at a framed print in his studio. "It was released as a split single with Nirvana."

That's maybe not what one would expect for the work of a formally trained, 78-year-old painter who lived through the Blitz in London – but then maybe we should re-evaluate our expectations. Especially because expectations are the first thing to be shattered when viewing the work of this artist. This is why:

Bucknall creates full-sized portraits, oil on canvas, of Elizabethan figures in the costumes afforded by royals and gentry of the time: so much rich brocade, so many swaths of beaded velvet, such depths of ruffed or lacy texture and fur-lined finery adorning these bodies! Finery as fine, in a different sense, as the paintbrushes that the artist must have used to render such precise detail. But there are no facial images of particular lords and ladies, kings and queens: These painstakingly wrought figures support the heads of birds, of toads, of dogs and cats and reptiles and even, a few times, bizarre insect-mammal combinations that might have recently immigrated from New Crobuzon.

That's from this review of Bucknall's show at D Berman Gallery back in 2010.

And that's just the sort of thing – old works, new works, all vivid and compelling and sublime – improving the walls of the Workman Gallery at this very moment. But why, is the question we want to ask. Why always these animal heads and the conflation of nonhuman creatures with Elizabethan –

"When I was a graduate student," says Bucknall, "I was real intense about what is art, what is the fundamental? There's something there – this common thread that connects one experience to another, a visual experience to an auditory experience, the smell of a lemon to a certain flower, to a certain shirt that somebody's wearing. And I got into Jungian psychology and actually started trying to paint the archetypes of the collective unconscious. The Trickster figure, the Milk Mother archetype, Gaia the Earth Mother, the anima, and so on. And I went back and looked at primitive art – Assyrian, Egyptian, mythological figures – which is, of course, where Jung himself would refer you to for the archetypes. And of course that's where I found a lot of animal heads."

Austin Chronicle: So from Jungian underpinnings to a sort of … Dutch Masters' version of The Wild Kingdom?

Malcolm Bucknall: I also think the animal heads often express human emotion more immediately than the human heads do. Because animals are natural all the time. Humans are natural only some of the time. Animals make love, they take a dump, they chase each other and gambol, they're ferocious and attack and eat each other – and they're quite unconcerned, they're not looking over their shoulder, "What do you think about me?" And humans have those emotions, too, those feelings, those facts of being. But we tend to lock those up and manage them.

AC: I've noticed that many of your bigger paintings are regal, they have such a sense of elegance, and many of them are somber and serious. And then there are smaller works you do that are more like, well, like really fine cartoons with a lot of whimsy to them. What makes you decide one way or the other?

Bucknall: I think time is part of it. The faster, smaller ones are more like one-liners, and I see those more as emotional states of being. And I see that as referring to childhood, when you have this real sense of wonder and things are happening for the first time. It's all fresh, it's new, it's spontaneous and uncontrolled. And then, as we get older, we start scheduling everything, controlling everything. Wordsworth says that art – well, he said poetry – that it's "emotion remembered in tranquility." And what I see there, in those smaller works, is me – scheduled, organized, with some skill that I've learnt over the years – recalling and bringing back these spontaneous specks of being and the wonder of childhood. Which, from the vantage point of old age, I can see with some perspective. I can organize them, which you can't at the time, because you're overwhelmed. And the larger paintings I see as more evocative. They're not one-liners, they're a little more like a novel. And maybe they leave the viewer a little more outside, looking in on other people's lives – rather than a direct hit. And, again, there's that sense of wonder: How do other people live, how was it in other times, how would it be if, and like that.

Even when others' lives remain in mystery … we do know this: If you're among those people who enjoy art that intrigues the mind as much as it pleases the eyes – and this work pleases the eyes one hell of a lot – then you'll want to be sure and see this show on Saturday the 23rd, the final day before it's taken down from the always inviting Wally Workman Gallery.