The International Modern Quilt Guild: The First QuiltCon in Austin

And these aren't, as the saying goes, your grandmother's quilts 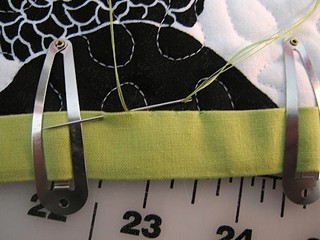 You can see a hell of a lot of gorgeous quilts at the Austin Convention Center this weekend.

You can also attend workshops, see demonstrations of techniques and products, shop in the booths set up by companies like Bernina, Stitch Lab, Blue Underground Studios, Superbuzzy, and others. But when you look at what's on display in the non-vendor exhibitions, you won't see quilts that are designed as they've been designed for hundreds of years. Neither will you see quilts that are made only as pieces of art.

"There are three main areas of quilting," says Heather Grant, founder of Austin's chapter of the Modern Quilt Guild. "There are traditional quilts, and they can be made to be used or not used. There are art quilts, which are made to be not used at all. And then there are modern quilts, what we're dealing with here, and our main foundation is that these quilts are made to be used. Because you might see a traditional quilt, but it might have eight hundred hours of quilting work put into it? You're never going to see that with one of our quilts, because you're not going to invest eight hundred hours into a project that's gonna be, like, used on the sofa, have coffee spilled on it, maybe puked on – you know what I'm saying? We make quilts that are made to be used."

Grant is also the director of marketing and programming for this international guild that started in Los Angeles in 2010. So she was the perfect person to ask why this very first QuiltCon – an event that has guests coming in from five continents, ten countries, and 47 of the United States – why this inaugural celebration isn't being held out there in California.

"It's funny," she says, "because Alissa Haight Carlton and Latifah Saafir founded the whole thing, and they were really pushing for Los Angeles, obviously. But I said, 'Well, why don't we survey our members?' And it turns out that our members really like Austin – they chose it themselves."

Austin Chronicle: Usually when a thing like this starts off, a convention or a festival or whatever, it starts off kind of small … but y'all are like Moontower Comedy or something: Instantly huge.

Heather Grant: [laughs] Yeah, when we announced it, we thought it was gonna be smaller than it was. But it just grew and grew, based on the demand and feedback that we were getting. It's not a huge show, really, but it's a big show. I'd say it's middle-of-the-road for international quilts shows.

AC: And the quilts themselves – what is it that differentiates them from traditional quilts, designwise?

Grant: Well, it's a much different design aesthetic than traditional quilting, which tends to follow common blocks, and many of them are laid out in rows and columns. Modern quilts utilize what we often call alternative gridwork and negative space. There are also really bright, bold colors – and we use scale a lot. Like, we'll take a traditional style – we have a category called "modern traditionalism" – but we might take a traditional quilt block and blow it up and crop it, turn it on its side, using inspiration from modern art and mid-century modern design.

AC: Are there non-traditional materials being used in Modern Quilt Guild projects?

Grant: No, it's pretty much all cotton fabric. And it can be cotton fabric that's produced by the quilting industry, but also vintage sheets are really popular. And you can't find that through stores anymore, because people collect them now: Sheets from the Sixties and Seventies, because they've got this very modern vibe to them, with huge floral prints that have this great feel that you can't really find in textiles today.

AC: So, like, vinyl or latex or fur – that'd be used more for art quilts?

AC: And of course there's a big difference between a fabric collage and a quilt, right? It's the stitch-work that makes the difference?

Grant: Yeah, a fabric collage, it might be glued, it might be on a wooden backing, it may or may not be stitched and have a lot of raw edges. Modern quilts are traditional in that they have a fabric backing, a batting, and then a top. And there might be raw edges, but those edges are stitched down so the quilt's not going to come apart. You can wash it, basically; a fabric collage, you might not be able to wash.

AC: What does it mean to be a member of a local chapter? What kind of activities are involved?

Grant: There are meetings once a month, and there's a show-and-tell where you show your work. And sometimes someone will do a tutorial or a lecture, but mostly we just meet and talk about modern quilting – like, what things you like, what don't you like, and just be inspired by each other.

AC: In the international scene of modern quilts, are there any, like, celebrities in Austin?

Grant: In terms of quiltmakers, probably not so much. There is someone in the industry who's very connected, and that's Kim Kight of True Up. She was very inspirational in the early days of the movement, and she runs this blog called True Up, which is about fabric. And when Modern Quilters first started, it was really hard to find fabric that met the aesthetic – because it was a land of civil-war reproductions and stuff. And so Kim promoted and showed the really interesting fabric companies that were providing collections that appeal to modern quilters. She does quilt, but she's more known for her, ah, her curation of fabrics.

AC: So, like, Kim Kight who used to be my boss at the Chronicle about ten years ago?

Grant: She's definitely one of our largest personalities in town. And – oh, there is a rock star, I would say: Malka Dubrawksy, who lives in Austin and does a lot of work. She's teaching at QuiltCon, and she's got a blog called Stitch In Dye. And there's Laurie Wisbrun who's a fabric designer for Robert Kaufman Fabrics.

AC: This all seems very … female-centric.

AC: And so is the next QuiltCon going to be in Austin, too, or will the location rotate among cities?

Grant: Well, we'll be having a QuiltCon every other year, so the next one will be 2015. And we're going to survey our membership and see what they say before we make a decision on the next city – but I think Austin is definitely a possibility. If the members vote for it, it will be Austin again, because it's really up to them. And I think that Austin has a lot going for it, you know? It's just a great place to visit in the middle of February. And it really fits the personality of a modern quilter – not every city fits that personality.