Where Serenity lands, the TARDIS occurs, and there's a certain Abbey … 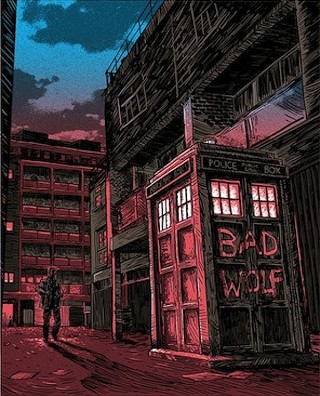 Time And Relative Dimensions In Space

That is to say: The Austin-based artist, best known for the fantastic graphics celebrating his love of movies and comics and all things geekified and true, has lately been drawing realistic illustrations – issued as full-color, limited-edition screenprints – based on the environments in which pop-culture fantasies occur.

Look what he's got on the walls of so many cultural outposts these days: The buildings and cityscapes, the hardware and horizons, the almost palpable places of modern mything enaction:

Moe's Tavern from The Simpsons.
The Frozen Banana Stand from Arrested Development.
Mr. Hooper's Store from Sesame Street.
Satriale's Pork Shop from The Sopranos.
Strickland Propane from King of the Hill.

Yeah: You know what I'm talking about.

Doyle's first show of the series, also presented by San Francisco's Spoke Art Gallery, sold out instantly. Which kind of stunned the raven-haired father of two, whose Nakatomi Inc company sells gig posters and popcult prints by himself and a growing stable of other international talents.

Now it's a year later, and the indefatigable creator – who's dropped about a hundred pounds via a trainer-enforced physical regimen, btw – has a new group of 'Unreal Estate' to offer the world. Settings from Dr. Who and Firefly and Twin Peaks and Mr. Rogers' Neighborhood and Downton Abbey and many more.

But, check it: Doyle's not sure if this second show will sell as well.

He's not being disingenuous, really. What the man's doing, standing there in his bright green kicks, a sort of bewildered who-me? expression on his newly lean & whiskered face … what the man's doing is striving to retain some fucking humility in the midst of incipient stardom.

I went to bid Doyle a farewell before he and his wife – the lovely Angie Genesi – left for San Francisco the next day. And of course I asked him a bunch of questions for the Chronicle, for you readers who want to know more about what's up with the man and his endeavors these days. See here:

Austin Chronicle: Congratulations, man! What you have going with your art these days, Jesus, it seems like an extreme case of Nice Work If You Can Get It.

Tim Doyle: Well, I'm just thankful that the nerdy shit I draw has found an audience, and that people respond by buying it. I'm incredibly lucky in that regard. I mean, obviously, I work hard and I credit myself for some of that success; but, really, it's just because the public has responded so strongly.

AC: When you did the first section of "Unreal Estate," were you already planning on this continuation? Or was it public response that kind of edged you that way?

Doyle: Public response had a lot to do with it. I had no expectations for that first art show. I knew some of the artwork was good – because I liked looking at it after it was done, y'know? [laughs] I wasn't tired of it by the time I was done with it. But I had a list of ideas for prints that I wanted to get to, that I didn't have time or space to. I thought two Sopranos prints for the same show would be a little redundant, so I had to decide on which location to use. I didn't have a second show in mind, but, the day after the artshow, Spoke Gallery put the prints for sale online – and the majority of them sold out immediately. And that night the gallery owner took me out to eat, and he said, straight up, "So, next year, same time – 'Unreal Estate II'?"

AC: Ha! But, unless I'm mistaken – even though there was the gallery owner saying that, because of popular demand and big sales, and even though you've done more prints this time – there isn't a single thing that you've done that covers something you're not already passionate about yourself.

Doyle: I'm lucky in that way. I'm super-nerdy, and being an artist affords me a lot of time to watch television while drawing. And because I don't necessarily have to look at the screen the entire time, I can treat it like a radio drama in that regard: I know what the characters look like, I know their voices, so I can look away from the television. And I consume a lot of media that way, so I've been able to watch Downton Abbey and Dr. Who and, y'know, I haven't missed an episode of The Simpsons in probably a decade or more. So, yeah, I'm not just cashing in on what's popular – I'm actually interested in those properties. Very much so: Every single print is done from a place of love. I really didn't think I was going to do a Downton Abbey print for the series. But then, about a month or two ago, I started watching it – and got hooked hard. That show is really good.

AC: And, ah, speaking of really good shows – do you have any plans to do a Game of Thrones print?

Doyle: I almost did a Game of Thrones this year, but I just didn't have time. If we do "Unreal State III," I'll definitely do one. I wanted to do the Wall, as seen from the forest – I think that'd be real interesting. And I want to do it based on the description in the novels, as opposed to the show, where it's that much more massive. My wife has read every single one of the Game of Thrones books, so I can use her as a good reference.

AC: OK, now I've got two more questions for you, and the first one's technical and the second one's, I guess you could say, legal. First: Your color palette. I've been following your work for a long time now, and your color choices seem to be expanding and also getting more, ah, subtle. Tell me about that.

Doyle: Well, the thing about doing a sequel show is that you don't want to just repeat everything you already did – even though everything I already did seemed to work so well. I'm purposely drawing more, well, to you the colors may look more subtle, but to me they're kind of more extreme. The color fade in the sunset on that Downton Abbey print, it's got some neon pink and orange in there – but it's the way the sky looks. The image I based that sky on, it's a photo that I took here, from this parking lot – that's what the Texas sunset looks like at this time of year. Now of course the show's set in Great Britain, and I have no idea what the sunsets are like in Great Britain, but I'm assuming they can't be that much different! Depending on, like, the pollution levels and so on. [laughs] So, yeah, I'm trying to pick more naturalistic colors – but nature can be pretty crazy sometimes. And I'm trying to branch out a bit, but there are some color palettes you see repeated, just because they work so well. The new Dr. Who print uses the same color palette as the "Moe's Tavern" Simpsons print from last year; it's set up a little differently, but, if you look, it's the exact same colors.

AC: And the legal question: Sometimes, when people do renditions of popular properties, there's a problem with copyrights?

AC: But since you seem to do this thing where you enter the environment of the property, like you're inhabiting it, and then you draw from that – like a plein air painter, except that you're in this other world … you don't have to worry about, ah, infringement issues so much, do you?

Doyle: You know, I'm not a copyright lawyer, but I'm very interested in the ideas of intellectual property and public domain and interpretation and what qualifies as parody. I've done a lot of reading on this, and I'm pretty much finding my way through by gut instinct. I really don't know where the lines are, to be crossed or not crossed, but from everything I've found out, there is no line. It's just who's going to get angry at you. And it's interesting, because today I got an email from a guy who works for the Fred Rogers Company –

Doyle: Yeah, and when you get something like that, you get a little nervous. Like, "Gee, are they gonna tell me to cut it out?" But the guy said, "We here at the Fred Rogers Company absolutely adore your print, and we'd love to get one." And I emailed back, "Well, I adore the Fred Rogers Company, and I will give you one, just please take a photo of it hanging up in your office," y'know? I was extremely honored. So, yeah, I don't know where the lines are. You have Andy Warhol in the Sixties, doing Campbell's Soup cans without the permission of Campbell's Soup; and then he later got the endorsement of them; and then it got to the point of where Campbell's Soups has a line of Andy Warhol packaging … So it's a snake eating itself, and I think, as long as it's done respectfully and not crassly, most people are okay with it.

AC: That sounds a lot simpler than it probably actually is, though.

Doyle: There are obviously some properties you don't want to mess with. You don't want to mess with Disney, because they're dicks. And now that they own All The Intellectual Property In The World, this might be the end of it. I haven't had personal negative interactions with Disney, but you just have to look at their history and see that they're kind of jackasses. I don't like the way they manipulate our laws through lobbyists to preserve their intellectual property rights. Mickey Mouse – and Superman – should be public domain – because that's the way culture works. Culture gives to us and we give back to the culture, and at some point Superman is a communal experience of the American people – and the world at large – and no one person can claim ownership of the myth of Superman. I mean, you can say "These guys created it," but whoever created Paul Bunyan or the myth of Jesse James – who actually owns that? At some point these things become – they should become – the intellectual property of all of us. Because we all built it together, whether we were directly involved in it or not.