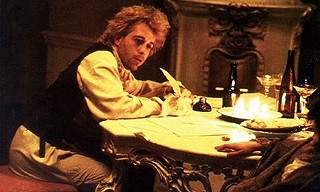 So you know how Tom Hulce is all sweaty and coughing and writing like mad to finish that awesome Requiem Mass before he keels over from the poison F. Murray Abraham gave him? But he doesn't, and isn't that a shame? Peter Stopschniski thought so and decided the Golden Hornet Project should finish what Mozart couldn't.

The local composer and his GHP partner-in-crime Graham Reynolds are tackling Mozart’s unfinished masterpiece in Frankensteinian fashion: breaking up its 14 movements and handing the parts off to a bunch of different contemporary composers – including some who write rock, hip hop, and scores for video games – letting them reconstruct the work however they choose, then stitching them all back together into a single work that will be performed in one concert. Their name for the project even reflects the sense of reanimating a corpse: Mozart’s Requiem Undead.

In this ambitious enterprise, Stopschinksi and Reynolds are taking on two movements apiece, and they're inviting 10 other composers to do one each. They recently announced a big catch: Glenn Kotche of Wilco, who was in Austin recently to perform the premiere of John Luther Adams' drum-kit opera Ilimaq, which was commissioned by Texas Performing Arts. (Reynolds insists that no incriminating photographs of Kotche were employed to secure his participation.) No other composers have been named, but Reynolds says they'll be announced soon. The full work, which is being developed in partnership with Texas Performing Arts and Texas Choral Consort, is scheduled to premiere in April 2014 in a performance at the Texas State Cemetery with the Consort performing.

To help raise funds for this massive undertaking, GHP is hosting a series of screenings of the film Amadeus – you knew there was a point to that Tom Hulce intro, right? – the first of which is tonight, Jan. 31, 7pm, at the Alamo Drafthouse Lake Creek, 13729 Research Blvd. Stopschinski and Reynolds will be on hand to discuss their process for the project and provide a musical sneak preview of the work. Stopschinski has already completed one movement, the "Lacrymosa," which he premiered with the Texas Choral Consort in 2011. From the nine measures actually written by Mozart, he spun a seven-minute fantasy for chorus and orchestra. For more information, visit www.drafthouse.com.