An Asian Mom and a Jewish Mom Walk Into a Bar …

Actually, they walk into Austin's Lucky Chaos Theatre this Friday 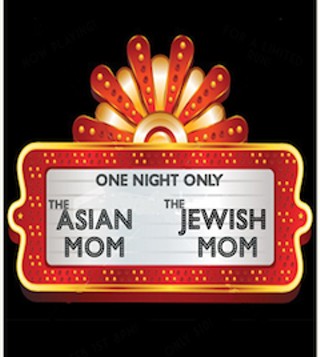 For this, we can thank Leng Wong and Michael Ferstenfeld.

We can thank them for The Asian Mom/The Jewish Mom, a one-night-only live show exploring the almost eerie similarities and more subtle differences between the two cultural identities. This will be staged at Salvage Vanguard on Friday night: Part talk show, part David Mamet excerpt, part improv, part live-video-conference-with-actual-moms, all real.

Thanks, as mentioned above,
to Leng Wong and Michael Ferstenfeld.

Well, Ferstenfeld we know a little better: He's thick among those Confidence Men: Improvised Mamet knuckleheads; he's the "Not-Ira-Glass" host of various shows at the Institution Theater. Affable guy, kinda short, well-dressed, dark and tidy beard and spectacles – you see him and you wonder if maybe he could adjust the hem on the sleeves of your favorite suit jacket. (In reality: He's a web developer.) A longtime part of the community, this Ferstenfeld.

Wong, though, is kind of new to the scene. Thing is, fresh from Malaysia – where, born of Chinese parents, she attended a Catholic school in that mostly Muslim country – she hit the Texas ground running and has done so much performing and organizational moving-and-shaking in so short a time that it makes the head swim. So the head swims over to a poolside coffee bar, grabs a java, and sits down to talk to this busy woman who's started both the Austin Asian-American Arts Collective and Lucky Chaos Theater Company.

[Full disclosure: No actual poolside bar: We talked at Thunderbird Coffee on Manor, which is quickly becoming a sort of auxiliary office for me.]

Leng Wong: Yeah, that's kind of a mouthful, I'm trying to figure out how to shorten it.

AC: And it's come together so quickly, hasn't it?

Wong: It started back in late 2011. I was thinking of putting together a mini-festival of original works by Asian-American authors living in Austin. That was very important to me, that it has to be people working in Austin, in our community. And then I decided I was going to create Lucky Chaos Theatre as a project of the AAAAC. Then it becomes easier, because I can concentrate on Lucky Chaos as sort of the base. Because what I'm trying to do is create more visibility. I'm trying to bring together the Asian-American artists in Austin and I'm also trying to bring a lot of the communities out to theatre, that don't usually go out to theatre. It's like a two-pronged thing.

AC: Was it that way from the start?

Wong: When I look at the projects that I want to do, I always have both of those things in mind. How do I promote and provide support to other artists at the same time as coming up with projects that resonate with communities that feel like "I never see myself onstage, I never see stories that I can relate to, so why should I go out to see these things?" And over the last two years I've met and worked with so many Asian-American artists in town, and the one thing they always come up with is, "I didn't know there were other people doing this!" So when I did that mini-festival – The Cheese Project – over a year ago – and the little talk show I did just a few weeks ago – that kept coming up.

Wong: Everybody, whether they're of Asian descent, or in the creative community, or just a regular person, they always say, "I didn't know there were that many Asian artists in town." And there are a lot, and a lot of them are doing really good work in whatever field they're in. Like Yen Tan the filmmaker, he's at Sundance right now, promoting his film. And of course PJ Raval, and a lot of creatives in town doing their thing. So the AAAAC is more of a place where people can get together and it's like a group hug or maybe a venting session. And to let people know that "Hey, what you do matters."

AC: Which sometimes everybody needs to hear …

Wong: One of the things about being an artist in general is that you don't always think that what you do matters, that it's important. Like, "Nobody cares, so why am I doing this?" And this is another place for the artists to re-affirm themselves, to know that people do care, that we want to see their stuff. And with the AAAAC I want to push what they do to the mainstream community and to the Asian communities. Because people will come out and support you – if they know you exist. So what the AAAAC and Lucky Chaos are trying to do is make the arts more visible to everybody.

AC: You did that talk show, and usually, when a project is just starting up, it might feature some good people, but people who nobody's heard of, until you build up a few shows and you get bigger names and so on. But you started out with, like, superstars. Beili Liu, Yen Tan, and – uh, what the hell, Leng? How'd you score people like that?

Wong: I'm telling you, that is exactly the kind of thing we have to work with! Just in Austin alone, not even including the rest of Texas – and I'm thinking big, I'm thinking Texas now – so, all these people, right? And half of them, I didn't even have the guts to ask them. But a lot of different friends, when I talk to them about the stuff I'm trying to do, they're like, "Oh, I know this person." Not even a personal connection, like maybe they saw them performing at a concert? And my friends are like, "All they can do is say 'No,'" and I'm learning that. And the people I've asked, the ones who couldn't make it, it was because they had prior commitments – not because they didn't want to have anything to do with the show. And that was really encouraging. And the ones who could come, based on the feedback I got from them afterward, they were so appreciative. A couple of them told me, "I didn't know I could be so at ease onstage." And I was trying to make it like that, like a tea or coffee thing: Let's just sit around and drink and talk, and it just happens that we have spotlights on us and it just happens that we have people watching on the other side.

Wong: Yes, and even though they're world-class artists and filmmakers and musicians, they were so happy that they could talk about themselves and their art. To have that interaction with people who appreciate what they do, because they don't usually have the opportunity to do that.

AC: So it's not just a one-shot kind of deal, then?

Wong: We'll definitely do it again. And the new Asian-American Resource Center that's opening up later this year, we're trying to get together with them, to maybe do the talk show on a regular basis – maybe once every quarter or something like that.

Wong: Yeah, it's one of those things that, when you say "Asian," it's like, "Well, who do you mean?" So we include everybody that thinks they should be included. And it's kind of a weird thing. Being Asian in America, you deal with that all the time. I have good friends from India and Pakistan, and they're like, "When people say 'Asian,' I'm not sure if they mean us." You know? And also for the people from the Middle East – like Persians. I say it includes everybody, but they're not sure sometimes. For Asian-Americans, that's a common thing: We hang out, we have cross-cultural things, but even we don't always know what it means.

AC: And it seems like there's a big Asian-American population here in Austin …

Wong: There is! But people kept telling me, "You should move to Houston, because Houston has a way bigger Asian community." And that's true. But it's not about the numbers. It's about the kind of community and environment and vibe that a city has, and I think Austin is the best city for me to do this project. I've been around for not a long time, and we've had a really good turn-out for all the shows – much more than I could've ever hoped for. And it's just the tip of the iceberg.