Finding the Funny in Serious Music 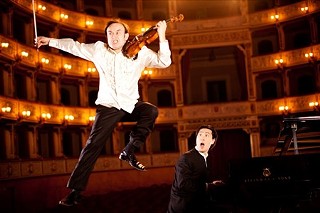 Classical music can be funny.

No kidding. All that symphonic stuff, thundered out with such gravitas in the concert hall, and the chamber music, so soberly earnest, can make you split the sides of your tuxedo coat – if it's being played by the right person.

Or two persons, as in the case of Igudesman & Joo.

You're not familiar with these madcap musicians – one a wild-eyed Russian violinist, the other a small-handed Korean-British pianist (I'll leave it to you to figure out which is which), who met at the Yehudi Menuhin School and irritated each other so much that they had to form a comedy act? Well, do you recall those Warner Bros. cartoons that had Bugs Bunny and Daffy Duck facing off against each other on the concert hall stage? Fill it out to three dimensions, and substitute skin and hair for fur and feathers, and you'll have a pretty good idea of what they do.

Igudesman and Joo are the latest in a long line of classical musicians who have mined mirth from the medium, and like Victor Borge, Spike Jones, PDQ Bach, Anna Russell, Harpo Marx, Dudley Moore, and Austin's own Lyova Rosanoff and Steve Saugey (who goosed many a Dead White Composer in bits for Esther's Follies and their own Forbidden Classics shows), they employ expert musicianship in undermining the pomp and pomposity of serious music. What begins as a familiar strain of a classical melody is suddenly invaded by the 007 theme. Joo picks out a theme by karate-chopping the keys. Igudeman's bow is sucked into a vacuum cleaner by Joo. Igudesman slams the keyboard cover on Joo's hand, "chopping it off." If there's an opportunity for a musical gag, they'll take it, and you'll never take classical music quite so seriously ever again.