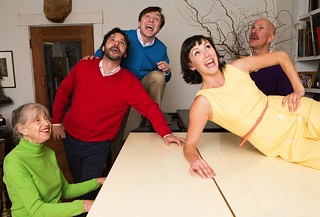 If you were listing Austin's top songwriters, Dick Price might not be a name you'd rush to include – unless you were Matt Hislope. As one-half of the Rubber Repertory creative team, the Esther's Follies star co-produced two revues of Price's songs, and tonight he opens a third: Ordinary Peephole: The Songs of Dick Price.

The new show draws from the extensive catalogue of Price originals – more than a thousand songs penned over the last 30 years – and what distinguishes it from the Rubber Rep hit shows At Home With Dick and At Home With Dick 2, both of which featured the songwriter performing his own material in his own apartment, is that Price's songs will be sung by an ensemble of local artists.

That's almost unheard of. Anybody who knows Price's work – and it's a relatively small group – knows Price singing it. He's never pursued fame or even a substantial audience. Most of his music was circulated through cassette tapes he sent to friends himself or on the Dial-a-Tune service he maintained from his home for close to two decades (on which he'd record a new song every day!), and his fan base grew because somebody who had heard his work would tell a friend, "You have to hear this." His closest brush with fame was through the Dr. Demento radio show, which played a few dozen songs through the years.

Hislope and Josh Meyer – the other Rubber Repper – more or less dragged Price into the spotlight in 2005 by producing a show around him, and it was enough of a critical and popular success that they mounted a sequel. Now, Meyer has left for Los Angeles, and Hislope has decided to go a third round with Dick Price by himself. In this email interview, he explains why and how he put together this full evening of songs by Austin's great novelty songwriter.

Austin Chronicle: You had great success with the At Home With Dick shows, in which Price performed his songs himself. What inspired you to want to get together a group of other people to sing them, and why now?

Matt Hislope: Well, it's been over six years since the last At Home With Dick, and while Dick's been throwing around ideas for a new show (one called The Souring about a particular relationship gone wrong, another involving his favorite dinosaur park and race relations in Waco), he isn't the kind of person that you can pressure into anything, and I really wanted there to be another public forum for his work. Very few people have covered Dick's songs before. I thought that would be interesting and a way to get these songs out there without having to twist Dick's arm to do something before he was good and ready.

AC: In assembling the cast for Ordinary Peephole, what were the qualities you felt were important for a singer of Dick's songs? What do you feel like the specific cast members are bringing to the revue?

MH: I made a list of people I really wanted to hear sing Dick's songs, and amazingly the stars aligned and most everyone on the very top of my list was available. (And when they weren't available, I stepped in. I'm my own second choice.) I tried to get a mix of people that could both do Dick's effortless, conversational style and also bring a certain level of "acting" to the songs that Dick just doesn't do. Mark Stewart has an inherent "younger Dick" quality, and I knew him to be a fan. Jay's an incredible physical presence and very funny, and I thought he could really nail a lot of the novelty songs. I was interested to hear how some songs would fit in a female voice, and every time I've heard Adriene Mishler sing, I've been charmed and delighted – and I thought she could really class up the joint. These are also all people I've enjoyed working with before (on the Rubber Rep shows A Thought in Three Parts and Jubilee). Lyova Rosanoff is a dear friend of mine and seemed like a perfect fit with DIck's work. She spent 30 years playing at Esther's Follies, and has written her share of novelty songs, to boot ("Jalapeño Chorus," anyone?).

AC: As you were putting this together, Dick had a health crisis. Can you talk about that a little and how it affected the production?

MH: It's definitely made everything a little more poignant, that's for sure. The original plan was that we would get the show together and then I would let Dick sing or play whatever he wanted in a cameo appearance. In November, Dick had brain surgery related to aqueductal stenosis, and since then has been undergoing cognitive and physical therapy. So it became clear that he would not be up for performing, even in a limited capacity. But I've been in contact with him every step of the way. We spent a lot of time listening to old recordings together, and he's definitely had ideas about what should be in the show.

On a side note, he came to rehearsal for the first time last night and sang along with almost every song. Toward the end of the show, he was moved to stand up and demonstrate his arsenal of 1960s dance moves, and we all joined in.

While I was driving him home, he eagerly suggested that we make plans to tour the show to different houses across the country and begin work on a new show of all the Halloween songs like "Creepy Little Creatures," "My Mommy's a Zombie," etc.

AC: Once again, Dick's songs are being performed "at home," but this time the home is Lyova Rosanoff's. What was the thinking behind that?

MH: I just wanted to maintain the overall spirit and flavor of the other shows. Lyova has such a great bohemian enclave that when she agreed to play for the show I was instantly like, "Well, can you do me one more favor...?" Also, Dick's old apartment – the setting of the previous two shows – was tragically turned into condos a few years back, and Dick's new abode just isn't as conducive or centrally located.

AC: How do you personally feel singing the songs of Dick Price?

MH: I'm obviously a huge fan, so singing these songs is something I do anyway. I've always been awed by Dick's talent and prolific output, and I'm honored that he threw open his back closet, turned over his life's work (consisting of hundreds of cassette tapes dating back to the early Eighties and lyrics scrawled on the stationery of whatever day job he'd been working at the time, as well as his dream journals and answering machine messages), and basically said, "Do whatever you want to with this." I find singing these songs enormously pleasurable, but I also feel a sense of responsibility: to do this right and hopefully make other people love Dick as much as I do. One thing in the show that really gets to me is a song that Dick originally wrote about his father, but I can't help but think about Dick every time I sing the lyrics: "Each night when I dream, he's renewed to the way he used to be."