More Things in 'Heaven and Earth'

Fidencio Duran opens a new solo exhibition at the MACC

The artist whose nine-panel painting The Visit sends travelers at Austin-Bergstrom International Airport on their way, was away himself for three months, enjoying an artist residency at the Santa Fe Art Institute. But he's home again and ready to show some new work in a solo exhibition opening Saturday.

"Heaven and Earth" is the title of this all-encompassing exhibit in the Emma S. Barrientos Mexican American Cultural Center's Main Gallery. Duran's new work – which we hope includes the five paintings that he finished during his autumn stay in New Mexico – includes not only the images of family and Latino heritage that have been the artist's longtime passion, as seen in The Visit and his murals at the Parque Zaragoza Recreation Center and Holly Power Plant, as well as the rolling verdant landscapes that you'd expect from a show with the title it has, but also images of nature given a fantastic and sometimes whimsical spin: two hawks fiercely winging their way above a bird-sized ranch house perched on the treetops, with a snake stretched through its interior, a group of songbirds inside a miniature conservatory, three making music around a tiny grand piano while a parakeet in a beret paints on a canvas. If the few samples this writer has seen are any indication, Duran is in the midst of an exceedingly fertile creative period. The colors in these works are vibrant and warm, like the images were all captured in that "magic hour" before twilight, and they all but glow with Duran's deep love of this area, its natural beauty, the creatures who inhabit it, and its people, every one of whom is treated as if he or she is a member of Duran's family.

Duran won't be the only one in the spotlight at the MACC tonight. Opening in the Community Gallery is another exhibit, this one celebrating artwork by Tejano Hall of Famer Oscar Martinez. Titled "The Big Red Bus: A Retrospective by Music Legend Oscar Martinez," it contains paintings that the Corpus Christi native, who's been active in the music business since the late Fifties, made of his days in the Seventies touring Texas with his orchestra on a red school bus. You'll be able to enjoy the work of Martinez the artist through Mar. 30, but if you attend tonight's opening, you'll be treated to Martinez the musician performing some of his favorite numbers – surely "El Tejano Enamorado" among them – backed by Larry Lange and His Lonely Knights.

By the way, before you go, be sure to log in to www.facebook.com/losamigosdejose and vote for Duran in the Jose Cuervo Tradicional Mural Project. The artist is one of 10 finalists in this national contest sponsored by the tequila maker to select the most inspiring mural to feature Latino themes around music, education, and family. A win for Duran could mean $15,000 for him and another $15,000 for a nonprofit in Northern California (the area he's representing in the project), and you'll want to be able to tell him face to face that he has your vote.

"Heaven and Earth" and "The Big Red Bus" open Saturday, Jan. 19, with a reception from 6-9pm, at the Emma S. Barrientos Mexican American Cultural Center, 600 River, and will be on display through March 30. For more information, visit www.maccaustin.org. 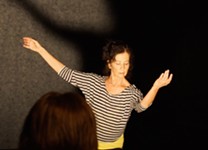 2015 Arts Hall of Famers Announced
Duran, Gold, and Robertson to be inducted by Critics Table