'The Rules of Basketball' at the Blanton reviewed 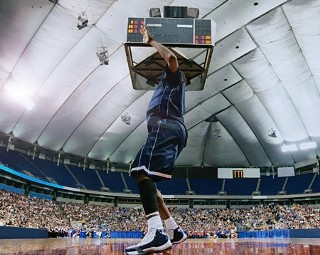 "The umpire shall be the judge of the men."

This line leapt out from James Naismith's original rules for basketball like a center going for a jump ball. Its curiously biblical ring called to mind Jesus seated at the right hand of the Father to judge the living and the dead – which proved quite fitting for this Blanton Museum of Art exhibit focused on hoops.

See, now that we're well past the century mark since Naismith typed out those 13 simple guidelines for playing roundball, his rules have the weight of history behind them. And with the huge growth of the sport, in popularity and as a commercial enterprise, these founding precepts have been transformed into holy writ. Looking at the fragile, stained pages carefully encased under glass at the Blanton – courtesy of philanthropists Suzanne Deal Booth and David Booth, who purchased them at a Sotheby's auction for $4.3 million – one feels a certain reverence is due. These are, after all, the commandments as handed down from that Massachusetts "Y". Go forth, and shoot the j!

The sense of the sacred is reinforced once you pass beyond Naismith's rules to confront the game today, as it is captured masterfully on film and video and keenly interpreted by artist Paul Pfeiffer. With titles such as John 3:16, Fragments of a Crucifixion (After Francis Bacon), and Four Horsemen of the Apocalypse, the imagery of the New Testament is never far away. The ball, in a video edited so that it only passes from hand to hand to hand, eternally spinning but never shot, never launched toward the basket, never given the chance to score, becomes a manipulated, martyred thing – Jesus cruelly passed from centurion to Pilate to Herod and back again. On another looping video, a player lets fly a ferocious (albeit silent) scream that's punctuated by dozens of flashbulbs in the seats far behind him, his raging outburst repeatedly nailed to the spot by a hundred pinpricks. In a series of large-scale photographs, a single player is captured in action on the court, sometimes in mid-step, sometimes in mid-air, his stature magnified by the straining musculature and low position of the shot – always from the subject's waist down to his ankles. To the crowd beyond – and the crowd is always evident in the shot, distant and small but vast – this larger-than-life figure must be something more than human: He is a bringer of famine, pestilence, war, death. Naismith's homespun creation, with its ball and pair of peach baskets, has given way to arenas of cosmic proportions in which each game plays out the battle of Armageddon. Something's out of scale in this sport now, the images suggest, and it's echoed in the layout of the Blanton show. Guest curator Regine Basha has put plenty of space between the works in a way that calls your attention to it. You sense the galleries as too large for the number of works. But then that's also true of the venues where pro bball is played – those cavernous stadia that hold tens of thousands of spectators. We feel here what we feel there, and what we see in Pfeiffer's digital prints: the great distance between us and the players, literally and figuratively. We can't come close to driving into the paint and dunking the ball and rebounding the way these contemporary titans of the sport do, and so we inhabit the space beyond, we the multitudes, and sit in judgment, cheering when we like what they do, jeering when we don't, criticizing their calls, calling for their heads – often with the rancor of Jehovah at His most smiteful. In doing so, we're not just far from the players but far from the game prescribed by Naismith. He called for the umpire to be the judge of the men, but in the inflated religion practiced today, we have usurped that role. "The Rules of Basketball" is on view through Jan. 13 at the Blanton Museum of Art, 200 E. Martin Luther King Jr. Blvd. For more information, visit www.blantonmuseum.org.