The pipes, the pipes are callin' again in Jessen Auditorium For three decades, no organ music has been heard in Rainey Hall, the original home of the University of Texas' School of Music. But that changes tonight when a fully restored Aeolian-Skinner organ is dedicated in a concert of holiday music with faculty members Judith Hancock and Scott Davis at the keyboards.

Rainey Hall – known for generations as the Music Building – was once home to a pretty special pipe organ: Opus 1024 from the Aeolian-Skinner Organ Company, a premier maker of pipe organs for most of the 20th century. It was designed and installed at UT in the early Forties, when the Music Building – indeed, the Department of Music itself – was still new. For 40 years, concert organists the world over came to the 40 Acres specifically to play the Opus 1024, and E. William Doty, who served double duty as the music department's first chair and the College of Fine Arts' first dean, trained many an organ student on the instrument. But when the School of Music relocated to the new College of Fine Arts campus on the east side of campus in the early Eighties and acquired the spectacular Visser-Rowland organ in Bates Recital Hall, the Opus 1024 was left to gather dust. Almost a decade ago, St. Andrew's Episcopal Church in Amarillo learned of the instrument – "like finding a Stradivarius in a musty barn" – purchased it from the university, and had it moved and installed in its new sanctuary.

But the absence of an organ in Jessen pained Gerre Hancock, who had honed his organ skills at the Opus 1024 as one of Dean Doty's students. When he and his wife Judith joined the School of Music faculty in 2004 to launch a sacred music program and teach organ, Gerre made it a mission to locate a new organ for the old auditorium. He finally found one in a Presbyterian church in Houston that was destined for the wrecking ball. The instrument, also an Aeolian-Skinner – Opus 1393 – had been designed for the church in 1963 by Roy Perry of Kilgore, Texas. The organ was removed from the church during the summer of 2011 and transported by a 54-foot traile to Atlanta, Ga., where a team from Coulter Organbuilders, led by Robert Coulter, undertook a complete refurbishment of the instrument. Over seven months, these craftsmen logged more than 7,000 hours washing and restoring its 1,604 handmade pipes; re-leathering more than 1,900 separate parts; restoring the 700 moving parts of the console; and installing new solid-state electrical switching for more than 20,000 feet of electrical wire, then trucking it all to Austin and installing it in Jessen, taking care even to restain the wood to match the finish in the auditorium. It took four men two trips and 1,000 hours to get Opus 1393 into its new home. Sadly, Gerre Hancock will not be able to hear the pipe organ that will serve Jessen for the 21st century. He died unexpectedly in January. But it's fitting that the person who will preside over the organ's UT debut is his partner in music and life for a half-century, Judith. In the concert of dedication, she will play Fugue sur le thème du Carillon des Heures de la cathédrale de Soissons, by Maurice Durufé, and Variations sur un Noël pour Orgue, by Marcel Dupré. The program will also include traditional hymns of the season such as "Angels We Have Heard on High," "Hark the Herald Angels Sing!," "In the Bleak Mid-Winter," and "Greensleeves." I can't imagine not wanting to be in the hall itself when this organ sounds forth, but for those unable to make it to campus, the concert will be webcast live on the Butler School of Music website. The dedication of UT's new Aeolian-Skinner organ will take place Friday, Dec. 14, 7:30pm, at Jessen Auditorium in Homer Rainey Hall, UT campus. For more information, call 471-5401 or visit www.music.utexas.edu. 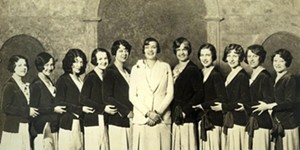