The Dead Are Speaking with the Tongues of the Living?

Yes, and it's all because of those creepy Blackbower Mediums 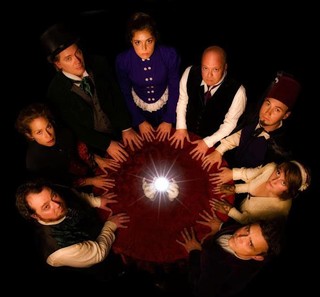 An actual talk-to-the-spirits séance, in this day & age?

Like, what, there's some kind of Chat Room Of The Dead app for the latest iteration of the iPhone? (Or, no, maybe it's only available on Android, because fuck the Cult of Mac?)

But from the wild talents of Gnap! Theater Projects, a séance makes a kind of twisted sense. Maybe not even twisted, maybe just an inevitable, arrow-straight kind of sense. Because improvisational theatre often dwells in the realms of fantasy, why not work the idea that channeling the voices of the dearly departed – even dearly departed strangers from earlier times – is something that can actually happen in this demon-haunted world?

"Séance originally came about from my desire to do some long-form improvisation in a more serious format," says Clay Towery, the director and chief medium of this otherworldly spectacle.

"Sara Farr of the Puppet Improv Project and I were talking about genres we'd like to improvise," says Towery. "Doing comedic, lighthearted improv is wonderful – but we were talking about how we wanted to do some darker improv, and Sara mentioned that she'd been part of a show based on a haunted-house theme. That sounded like a really interesting format, but I was attracted to doing something a little more period-oriented." Towery chuckles. "It's all that Shakespeare in my past," he says, "always poking at me to let it out. And so I thought, What about doing something surrounding a séance?”

Right. But not a modern séance? Not some group of contemporary, Internet-savvy acolytes of The Great Beast, reaching out to whatever shades might be lurking at limbo's threshold?

"The Victorians really were in love with the mysteries surrounding death," explains Towery, "and they had this weird fascination with the occult and communicating with the dead. It seemed a very interesting idea for improv. I've always had this warped imagination, and it's led me down some pretty bizarre pathways, so I really had a desire to see how the darker part of my creativity might manifest itself in an improvisational format."

Thus, the first Secret Meeting of the Blackbower Mediums.

"The first group of Séance lunatics was Sara Farr, Emily Breedlove, Marc Majcher, Jesse Overright, Stephanie Swenson, and myself," says Towery. "During the rehearsal process, we created and colored an elaborate world specific to the show's theme and genre – because that's what you do, as a foundation. Then, when you're ready, you go out and make up stories in the personal playground you've built out of your own dark, twisted imaginations."

And so now people can experience the second incarnation of this improv creepshow, every Friday and Saturday night at 8pm, through November 17th at Salvage Vanguard Theatre.

But, hold on, this Séance is something that's more than just passive, isn't it?

Towery grins, and it's a grin that seems tinged with a bit of … happy malice? "In this show," he says, "audience members enter the space as initiates and take part in the process, guiding the spirits to the mediums. It's through each night's audience that the mediums channel these dark, ghostly tales of the dead. They're usually very creepy stories, but we always have some uproarious moments full of the darkest humor."

And, just to be sure, Towery himself is there every night? Helping the ghosts of murderers and malcontents, scullery maids and fallen royalty, butchers and orphans and demons – helping all these restless souls to, if only briefly, live again?

The director's eyes roll back in his head and his pale hands faintly tremble. "I am present," he intones, "and the spirits flow through me!"

And now … is that my new micro-recorder, hovering two inches above the table?