If You Paint It, They Will Come

The "Shakespeare of Shortstops" is immortalized in art

At 20 feet tall, this Willie Wells towers over the one-story South Austin house next door, the house in which he grew up in the first decades of the 20th century; the house that he left in 1923 to play ball in the Negro Leagues and become one of the game's greatest players, black or white; the house to which he returned in 1973 and in which he died in 1989.

But while this Wells, newly painted onto the back wall of a home in the Bouldin Creek neighborhood, is out of scale to the modest home of his youth and old age, he's the size he has to be. Because this man was a giant in the game, routinely batting .340 or better over 20 seasons (more like .400 against white teams), appearing in eight Negro League East-West All Star Classics, pioneering the use of baseball helmets by making his own (after surviving a pitch to the head that knocked him out cold), fielding like a demon – after playing in Mexico, he was dubbed "El Diablo" – and, at the end of his career, managing and mentoring players such as Jackie Robinson. Who better to learn the pivot from than the "Shakespeare of Shortstops"?

Tim Kerr – himself no small figure in Austin's musical culture (Big Boys, Poison 13, Bad Mutha Goose, et al.) – did the artistic honors with the Wells mural, after being commissioned for the project by the home's owner, Paul K Johnson. The piece made its debut in early January, and now Willie Wells watches over the home of his youth and old age next door. That house and Johnson's are both in the 1700 block of Newton, but to see the mural, take the alley behind it that runs between Annie and Milton streets. 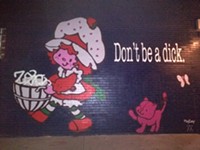