The Pinnacle of 10 Years' Worth of Comedy Festivals?

OOBs, they did it again One of the OOB's best: Available Cupholders

Tell you what: They done did it.

The Out Of Bounds Comedy Festival,
what’s more familiarly called the OOB,
this tenth annual iteration of the many-headed beast
that’s been sprawling across the afternoons
and heat-addled nightscapes of four venues in this city
since last Tuesday and doesn’t stop until Monday night?

It was bigger than ever this year ~
it presented more performers, more venues, more events,
more diverse people from more different places,
more improv celebrities, and more beer-fueled afterparties
(which someone really needs to provide Michael Joplin a map to,
because not everybody has a goddam iPhone, okay?)

Yeah, it was bigger than ever, and many of the acts we caught
~ Available Cupholders, WeirDass, the Frank Mills, Switchboard,
DHT, Skinny Bitch Jesus Meeting, Audience of Two, Slow Children Crossing,
and the sweaty, swirling, barely contained clusterfuck of an All-Star Maestro ~
were better than ever.

But what was really impressive was the practical tactical shit.

We stuck to just the Hideout and the State Theatre for this OOB, personally,
but our clandestine operatives, all ninja-masked & invisibility-cloaked,
reported back from the Velveeta Room and ColdTowne Theater,
and what we all realized was that this staggering juggernaut of entertainment
was running smoother than a finely lathed length of lubricated Teflon.

[Quite a feat, there, executive producer Jeremy Lamb.

Quite an impressive achievement, there,
with your various sub-producers and venue directors,
& their squads of seemingly tireless, possibly bionically enhanced volunteers.

Don’t think we haven’t realized that you quickly compromised the integrity
of at least two of our ninja-masked, invisibility-cloaked operatives.

You talented, professional, hirsutorufous yet balding maniac, you.]

And, oh, how we look forward to next year’s OOB!

Oh, how we can’t wait to see some of these brilliant troupes again!

Oh, how we’ll be watching for something to be fucked up in some major way
… because, certainly, talent & smarts & organization notwithstanding,
something’s gotta go horribly wrong when this big enjoyable thing,
this truly amazing Out Of Bounds Comedy Festival, gets even bigger. 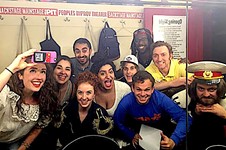