From Circus to Cocktails 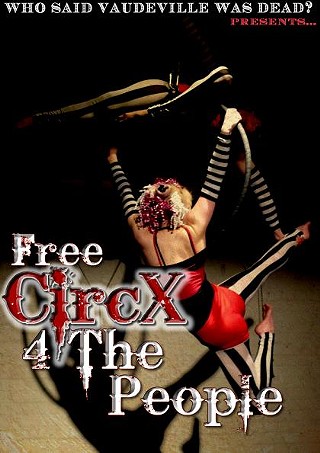 To dress up for the cabaret, or dress down for the sawdust? On Saturday, an assemblage of tumblers, clowns, aerialists, puppeteers and balladeers will be under the big top for CircX 4 the People: On Sunday, many of the same performers will be taking a more bohemian swing for Who Said Vaudeville was Dead?. Decisions, decisions …

The impetus for two very different shows on one weekend, producer/bundle of energy Jessica Ryan said, was very simple. With all-human Vespertine Circus from Oakland, Calif. passing through Austin, she and her fellow local performers decided to create two opportunities for them to display their mixture of sideshow, acrobatics and burlesque. Ryan said, "This is a community that lends itself from a gifting economy, so everyone is ready willing and happy to be volunteering their time, their efforts, their weekends."

For Saturday's CircX 4 the People, Vespertine will be joined in the antics by the puppeteers of Laura Freeman & The Hey Lollies, belly dance courtesy of the Drishti Dancers, and more. Ryan explained, there is nothing old-school or retro about it. She said, "With a generation of everyone changing the channels and Internet switch switch switch, you're getting a lot within five minutes. There's someone on fire over there, there's someone leaping off a trapeze over there, and it's constant action. It's exhilarating."

As for the Sunday show, Vespertine's headlining set will take a more devilish turn with the support of such stalwarts of Austin's burgeoning Vaudeville scene as the deliciously morbid Luna Tart. However, the different nights will see very different performances. Ryan (who does a mean Groucho Marx) said, "We can't do fire on Saturday, so we'll do fire on Sunday. We won't have aerials on Sunday, but we will on Saturday."

The two shows tap into a certain energy, a revival of once-ailing art forms like the old daredevil circus, vaudeville and burlesque, as epitomized by new institutions like Vintage Vivant, and Troy Dillinger's Austin Variety Show: KOOP Radio is even holding their own fundraising variety show on Saturday at the Swan Dive. For the performers, Ryan said, "There's this element of old school, of acoustic versus electric, and crossing between them is this neo-circus, neo-vaudeville." She added, "What's interesting is that people are finding new ways to express themselves, develop their craft and participate with other artists. It's everyone bringing something really unique."

So how to choose between the two events? That's up to the audience. Ryan said, "Are you someone that wants to dance and walk around from one stage to the next, or are you like, 'I don't want to contend with the heat.' Well, come out Sunday and sit at your own comfortable cabaret table and sip on cocktails."