A Twirl and a Tease

Texas Burlesque Festival leaves them hanging from the rafters 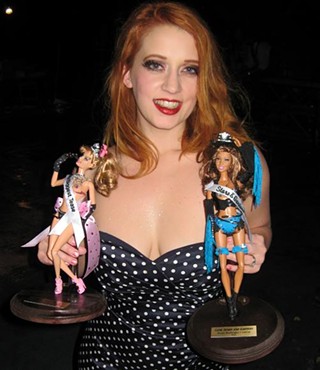 Call them bunnies or panty wranglers or stage hands: The true heroines of last weekend's Texas Burlesque Festival were the brave assistants who cleared, collected and collated every last item of clothing dropped to the floor by the performers.

It was no small endeavor. With dozens of performers from across North America, all wanting to take as many stockings home as they left with, that was a lot of panties to wrangle and dresses to rescue.

Some of those costumes had particular meaning. Ask Ruby Joule, co-founder of the Jigglewatts, what her favorite moment of the weekend was. The answer was simple but monumental: "Collaborating with the legendary Shannon Doah on a tribute and getting to wear her costume."

The big guests for the weekend were undoubtedly Doah and her fellow legend of the burly-q, Tiffany Carter. Both icons of the '60s and '70s proved beyond any shadow of a doubt that, when it comes to the tease, it ain't what you got, or even how long you've had it, but what you do with it that counts. As gracious and friendly offstage as they were enthralling on it, they were both the subject of tribute acts, created especially for the three-day festival.

For Coco Lectric, her chance to pay homage to Carter's body of work provided a personal highlight under the spotlight. When she came offstage, she said she was "greeted with a tearfully ecstatic hug from Tiffany Carter herself. We both started crying in each other's arms and the whole upstairs performer's section, upon witnessing the whole scene, joined us. There wasn't a dry eye among us."

If part of the weekend's aim was for Texas' performers to take the national stage, it was a hoopin', hollerin', wolf-whistlin' success. Austin's Erotic Rain defied gravity as one of the featured performers, Sasha Dahl worked her coquettish charms, and Black Mariah from Dallas gave the audience the old one-two: Onstage with her Betty Page tribute and offstage with her array of handmade fans and feather boas. It was another one-two for fellow Jigglewatt Jolie Ampere Goodnight, who not only took the audience choice award on Friday night but brought the house down as Carter, Doah, and fellow judge Annie Sprinkle dubbed her best tease in Saturday's competition.

She was not the only performer to walk away with more than just applause, as best costume went to Miss Orchid Mei. Denver's doyenne of disrobing caught the judges' eyes for best costume with her classical furs-and-diamonds look. There was also extra luggage on the flight back to Chicago, with two winners from the Windy City. Both got the big nod for what they had on as much as how they took it off: Lula Houp Garou was awarded best novelty act for her hula-hoop homage to Alfred Hitchcock's The Birds, while Viva la Muerte was dubbed most original with her saucy riff on Crypt Keeper. The big prize for top soloist went to Cha Cha Velour from Las Vegas, proving that comedy and tease most definitely go together as her glove puppet tiger got all handsy.