Stag Comedy wants to shower you in laughs 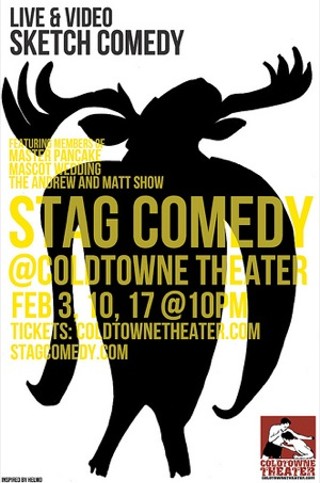 Stag Comedy – whose members have shattered funny bones as part of Master Pancake and KOOP's Mascot Wedding Show, among other comedic endeavors – is finishing a three-week run at Coldtowne Theater tomorrow night.

If you love laughing at foreigners, "that guy," or until you've possibly started bleeding internally, there's a good chance you'll enjoy the ride. I asked tallest Stag member Mac Blake what else to expect.

"A mix of awfully funny live and video sketches performed by awful people. This includes terrible word games, unhinged broadcasters, resurrections, and hopefully just the right amount of profanity. This is our last performance of this show before we begin crafting the next one. Master Pancake's Joe Parsons, who has missed the last two performances, will rejoin the cast for our final night and we're stoked about that.

"Also, the blood of the innocent will be spilled. Not literally but, yes, also literally. I can't help that."

(Editor's note: These people are not actually awful.)