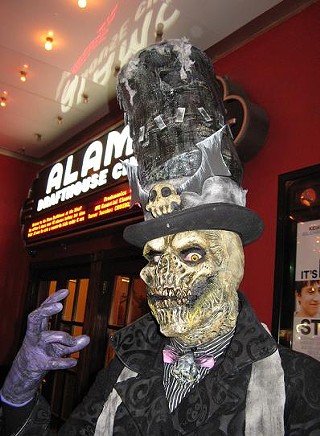 Every Holiday needs its public face. Easter and the Easter Bunny. Christmas and Santa. And, in Austin, Halloween and Mr. Creep, the Best of Austin-winning ghoul with a grin. Now Creep and his closest associate, artist of the macabre Matt Garcia, have spread their black wings as the haunting season begins.

After over half a decade as the artistic director for the House of Torment, this year Matt and his brother Mike set off on their own with a new endeavor: Global Fear Enterprises. Garcia described the firm as "a multimedia horror production, but it's not just horror." He added, "I don't want to stick to haunted houses. I want to be more vast in my creations."

Garcia has described his artistic style as a mixture of Joel-Peter Witkin and Dr. Seuss. Anyone catching Joe Nicolosi's Midnight Bumper during SXSW 2010 may have noticed some of Garcia's trademark design ethos in the monsters menacing the plucky heroine. Garcia said, "[Joe] contacted me after he'd seen my work. He knew I was the guy to go to for horror stuff and he said, 'I want to work with you.' So I've done that, and I've done a short Fantastic Fest video that's more social networking, with people catching zombies with their iPhone and Twittering. It was fun, because I got to supply all the effects."

However, the Garcia brothers are no slouches behind the camera or in the editing room either. Several of their trailers, as well as some seriously NSFW experimental horror shorts, are already up on the Global Fear Enterprises YouTube channel. Long term, Garcia said, "I've got some concepts for some independent films."

However, that doesn't mean Creep has hung up his haunting hat. This year his legion of ghouls have been helping out with Scare for a Cure, the cancer charity fund-raising Halloween attraction in the Hill Country, "We're donating a video trailer to them, we've done a PSA, and we're doing character appearances at Terror Tuesday at the [Alamo] Drafthouse." With a national-level reputation built from his work at Torment, Garcia is also building costumes and props for other haunts across the states. "We've got people who want to hire us from next season," Garcia said.

He's also preparing something a little more bespoke with the Scare-o-Gram. He explained, "You reserve a monster, say Mr Creep or Sarge or a werewolf or something, and then you have them sent directly to your work or your home or someone you have a vendetta against. They jump out and scare them, and we have someone there recording it."

Most importantly, Garcia sees this new phase in his career as a time of artistic evolution. He said, "I think it's more of a maturing. At first it was just, 'I love scary stuff, I'm going to make it.' Then it became, 'Well, I've developed a style around the scary stuff, and I know what to do with it.' Then I honed that skill, and now I know exactly what I'm doing with the talent I have, and what I'm capable of, and I don't want to be confined in a box."

Global Fear is already doing video production work for non-horror businesses. Having total artistic freedom, Garcia said, means "I can branch out. But if I do horror, I want to do something totally different an disturbing that's never been done, cause people think and traumatize them."