Jigglewatts go back to the '80s 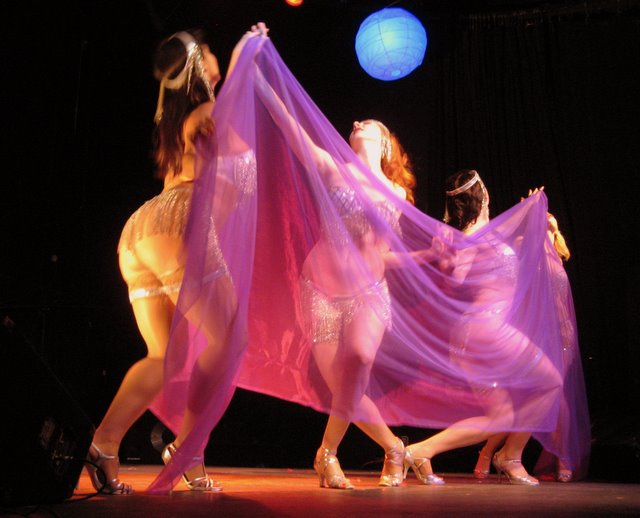 Break out your leg warmers and "Frankie Says" shirts. As part of their regular residency, the Jigglewatts will be taking a trip through some Prince and Madonna for tonight's Totally! The 80s Show at the ND at 501 Studios.

It's good times for the local burlesque ensemble. Last week, co-founder Coco Lectric was invited to share a stage with Dita Von Tees at the House of Blues in New Orleans. Next month, she and her fellow 'Watts Ruby Joule and Pearl Lux make a return trip to the Big Easy for the New Orleans Burlesque Festival, where they will be dancing to a live band. This all comes after a hugely successful Texas Burlesque Festival, where the full Jigglewatts (complete with Goldie Candela) and fellow Austin-based troupes Carousel Cabaret, Treats in Tights, and Kitty Kitty Bang Bang showed the world how they shake 'em in Central Texas.

Austin Chronicle: It's been a big year for the Austin burlesque scene and for the Jigglewatts. It really seems like you've reached a critical mass.

Ruby Joule: Part of it is that the burlesque scene in the United States and globally has reached a critical mass. I just found out today that there is going to be another burlesque festival in Charlotte, North Carolina. This is hot on the heels of the first ever Atlanta burlesque festival, and there's also Oklahoma, and New Orleans is entering its second year. Festivals are springing up everywhere, and there's a movie coming out with Christina Aguilera and Cher, which has got a lot of buzz. Whether it holds true to traditional burlesque or not, it's getting that word out into the public consciousness more and more. It's not quite such an underground thing any more. AC: Now you have a residency at the ND at 501 Studios, last Tuesday of every month

RJ Coco was instrumental in putting that together. When the Texas burlesque festival was held there, we really liked the venue, and we thought this might be a good match. We hadn't found anything in town that really seemed to fit in terms of capacity and stage and dressing rooms – all these things that are not usually needed by a live band. There are tons of venues for live music, but not many that can support something involving lots of costume changes. And that stage is very unique. You're not really sure which direction is facing, but that gives you lots of options and that makes it very personal.

AC Tonight you're going less old-school for your tribute to the 80s.

RJ That was the result of a late-night conversation between Coco and I. It may have been after a couple of Martinis. We thought, Generation Y, they're really into the 80s, so maybe we'll get some kids out who haven't been exposed to burlesque before, and a dance party, which everybody likes. I'll be doing a number to Prince's Kiss, which I've done one time before, and a brand new number to Betty Davis Eyes, which is going to be more of a classic kind of a song.

AC: So what next after the 80s night?

RJ: In August, we're going to be turning on the glamor full steam. September, not quite sure, and in October I think that we're going to have some special guests from New York coming to visit. We are also looking at the Dirty Martini And the New Burlesque movie. I've been talking to the film maker's agent and they're looking at showing the film in Houston and Austin. Did you hear that we're in the running to open for KISS? (dancing with Johnny Hootrock: Find out more about the competition here) If we get into the top five, then we'll be considered. That would be hysterical, glam rock meets Glam with a capital G.