The Luv Doc: The Digital Scale for Gayness 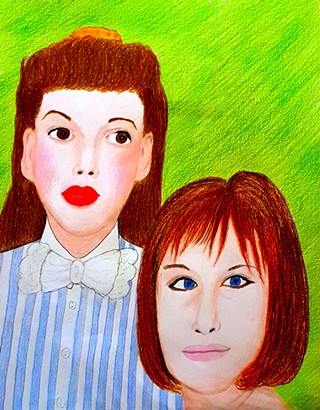 My girlfriend says I'm gay because I asked her to stick her finger in my butt when she was giving me a BJ. I think she was joking but maybe not totally. I used to have a girlfriend in college that did that and I liked it. I don't think I am gay, but I am not dumb enough to take her bait and argue with her about it. I think she would trust your opinion, so what do you think? Is it gay or not?

Wow. There is so much going on in your question I feel like Ashton Kutcher is doing a reboot of Punk'd. First, let me say that I applaud your bravery in sharing your sexual desires with your girlfriend. I can only imagine how flattered she feels by the vulnerability you've shown and the trust you've placed in her. I know you may be tempted to believe that your girlfriend really does think you're gay (at least a little bit, right?) but I believe a much more plausible explanation is that she is simply repulsed by the thought of putting her finger in your bum. Fair enough, right? Not everybody is titillated by the prospect of ass play. In fact, she might even be a bit perplexed about why you would find something like that desirable. Her first, knee-jerk response might have been, "Oh my God. How can I keep him from ever asking me to put my finger in his ass again?"

And somehow, in her mind, she thought, "Maybe if I accuse him of being gay ... " and there, my friend, is where this rhetorical train goes off the rails and plunges into a dangerous ravine.

Let me very clear: You have not provided enough information to assess whether or not you are gay. Back in the olden days, a man's gayness was often assessed by a series of unreliable analog inquiries. Does he like Streisand and Garland? Does he love show tunes? Does he walk lightly in his loafers? Does he call other men "honey"? Does he have an interest in interior design? Does he use the term "salmon" as a color? It goes without saying that these types of inquiry were grossly inaccurate and perpetuated ridiculous stereotypes – many of which still exist today.

Fortunately Badfinger, you and I live in the digital age. We expect a much higher degree of accuracy, so the old analog tests for gayness are pretty much useless anachronisms. In these modern times, we have a digital gayness scale that can easily pinpoint your position on the sexual orientation spectrum. For instance: If you prefer a pinky finger, but only up to the first knuckle, you're solidly heterosexual but open-minded. Ring finger, second knuckle? You're metrosexual at best. Middle finger all the way to the hilt? You might be bi. Thumb? You like it freaky but that doesn't mean you're gay, Two or more fingers? Your girlfriend could refer to you as an eager bottom, but it would still be inaccurate for her to call you gay. Really, the best way to truly know if you're gay is if you ask your boyfriend to stick his finger in your butt while he's giving you a blowjob, and even then you might not be gay: you might just be experimenting.

I know this is probably a bit much for you to wrap your head around, but just because you enjoy a certain sexual activity doesn't automatically qualify you for a whole new orientation. That, like the idea that you can judge someone's orientation by what finger they like up their butt, is just fucking preposterous. More importantly, it's nothing you should lose a wink of sleep over.

Look, the real issue here isn't you having to prove whether or not you're gay to your girlfriend. The real issue is that your girlfriend is using a particular sexual orientation as a pejorative bludgeon in order to avoid communicating her uncomfortable feelings about your request. That's some analog thinking right there, and like I said, we live in a digital age. If she doesn't want to stick her finger up your butt, that's her business, but she should leave the gay out of it – at least until you introduce her to your new boyfriend.