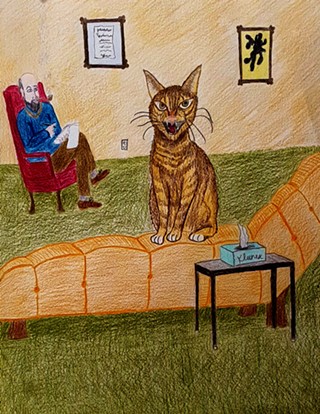 My cat hates my girlfriend and I don't know what to do about it. She lives in Northwest Austin and only comes over 2 or 3 times a week, but she usually stays the night so it's like she is living with me part time. She tries to be extra nice to him, but he won't have anything to do with her. He won't come into any room that she's in – even if he's hungry. I really want him to be comfortable around her, but I don't know what to do. Any advice?

I think your best bet in this situation is to call a cat therapist – preferably one who does couples counseling – and see if they can resolve your cat's issues with your girlfriend. Maybe there is some sort of regression therapy technique that could help your cat resolve his issues with your girlfriend. I know some people might say that with cats, talking doesn't help, but that seems a bit defeatist to me. Talking might not help, but it certainly couldn't hurt. Yes, it might get a bit expensive, but what's a few hundred (a few thousand? I don't know, I'm not a therapist, much less a cat therapist) dollars when it comes to your cat's mental health? That's the thousand-dollar question, isn't it? Actually, let's hope it's a hundred-dollar question at most, but you get the idea.

Bottom line is, pets are expensive, and I would bet that insane pets are insanely expensive – especially if they yank the leash out of your hand and run off and maul a toddler or something. Anecdotally, I can tell you that anytime I have seen someone's pet go all Cujo, the owner is usually even more surprised than the person who's being mauled. They always say something like, "I swear my 500-pound pet Bengal tiger has never mauled anybody before! He's just a big pussycat!" Exactly, a big pussycat with a dismembered toddler's arm hanging out of his mouth. How could they have possibly missed such a glaring mental health issue? It's hard to imagine. Maybe not enough one-on-one talk time? Pets have an annoying habit of defying our constant anthropomorphization of their instinctive animal behaviors.

Now granted, I will be the first to admit that I have never had a cat who went on a hunger strike, and I definitely have never had a cat who went on a hunger strike because he thought my girlfriend was an asshole. (Oops! There I go anthropomorphizing again.) But it's not unusual for cats – and really, pets in general – to distrust strangers, especially if they haven't experienced a healthy amount of socialization. Honestly, the same could be said of humans. Some of them just get a little edgy when they're around strangers. For all I know, your girlfriend might have a lot of anxiety about being around anxious cats. And TBH, you seem a little anxious about the situation yourself. Once again, I am not a licensed cat therapist, a veterinarian, or even an actual doctor, but I know one thing for certain: Anxiety generally breeds anxiety, so somebody in your house needs to show some zen. Tag, you're it.

Like I said, you should absolutely drop a big wad of cash on a cat therapist. If nothing else, it will stimulate the local economy, but if you're feeling pressed financially, you might just try patience and, also like I said, that zen thing. Maybe you and your girlfriend can smoke a bowl, or if you're prone to anxiety, take some CBD gummies. And next time you Netflix and chill with your girlfriend, put the emphasis on chill. Rest assured, your cat will eat when and where he wants to, but it wouldn't hurt to entice him with something flavorful – not the CBD gummies. They're more expensive than cat therapy. Give him something he really likes, like stinky wet cat food – you know, the kind of stuff that makes you retch a little bit when you open the can. Cats love that shit – almost as much as they enjoy feasting on the corpses of their dead owners. Aw, chill out, you weren't going to be using that corpse anyway. So there you go! Hope this helps! If it doesn't, you can always just go sleep over at your girlfriend's place!