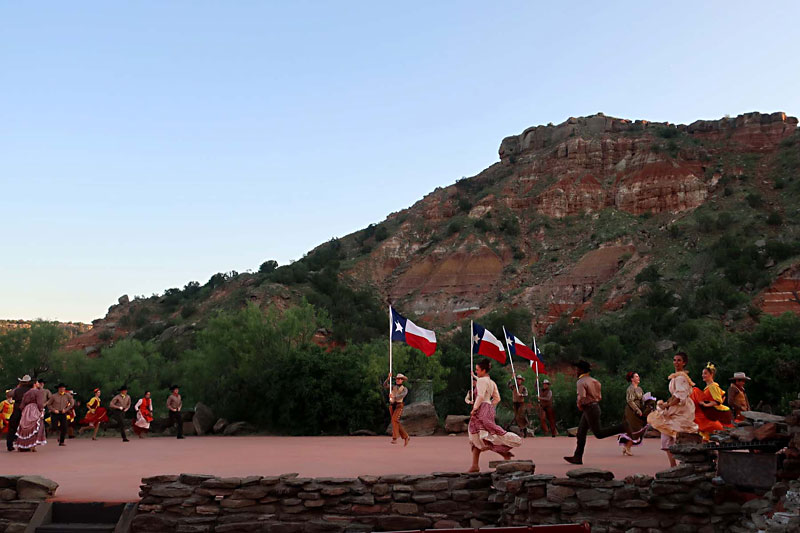 TEXAS Outdoor Musical in Palo Duro Canyon State Park outside of Canyon is the hottest ticket in town and the coolest show.

The summer temperatures in the second-largest canyon in the U.S. easily top triple digits. In its 55th season, the show, which runs June 1 to mid-August, takes advantage of the relief that comes once the sun drops behind the 600-foot canyon wall. While it might not be exactly cool, the dry heat in the shade is bearable. The schmaltzy script originally crafted in 1960 hangs its hat on historical references that are often far-fetched. The romance between rancher Charles Goodnight's niece and a pioneer farmer is the premise that supports a lot of singing, dancing, and pyrotechnics.

If you like the musical Oklahoma!, you'll enjoy TEXAS. The cast and crew do a great job presenting two hours of raucous entertainment. For my money, the star of the show was the multicolored canyon wall background and the way it was illuminated during the performance.

The best seats in the outdoor theatre are toward the back and to the left. The pre-show barbecue dinner is worth the money; your only other dining option in the park is the snack bar. The short behind-the-scenes tour is informative and fun. The highlight of the evening, at least for me, was when Benny Tahmahkera, the actor who plays Quanah Parker, gave a preshow talk on the Comanche and his great-great-great grandfather, the real Quanah Parker. He presented the only historic facts in a place where so much history happened.

TEXAS Outdoor Musical continues nightly except on Mondays through August 14. For tickets and information, go to texas-show.com.

1,557th in a series. Follow “Day Trips & Beyond,” a travel blog, at austinchronicle.com/daily/travel.