The Luv Doc: What in the Hell Is Going on at the Statesman?

What the hell is going on at the Austin-American Statesman? For many years I have enjoyed the witty commentary and musings of Ken Herman, who I consider one of the best local writers (second only to you of course) on local, state, and national politics in addition to just plain folks and events going on in Austin. He left (? retired, resigned, forced out) the Statesman the first of this month and has left a void in Austin local political reporting and life commentary. I also note the recent departure of Addie Broyles, AAS food editor, this month after 10 years of dishing out tempting recipes and stories on the local food scene. While I never was much for actually cooking her recipes I did enjoy looking at the food pictures and fantasizing how good it would taste. Sort of food pornography. Since you are in the newspaper business and no doubt have an inside scoop and keen insight into the latest departures and evolution (de evolution?) at the Statesman, please enlighten me. Does this foretell the end of a meaningful daily local newspaper in Austin? Should we just prepare ourselves to get fed a bunch of bland generic stories from national writers?

First of all, let me just say that your belief that I am even remotely plugged into the local newspaper business is charmingly naive. No one here at the Chronicle would dare describe me as a journalist. In fact, management won't even let me sit on the same side of the building as the actual journalists – not just because my mouth is a ceaseless font of distracting drivel, but because they legitimately fear I might pollute their minds with the type of outlandish factual assertions, needlessly hyperbolic language, and gratuitous profanity that undermines true, legitimate journalism. Fortunately I have an opulently appointed cubicle with a breathtaking view of the interstate access road, but I think that's only because, in the event of a drive-by by some gun-wielding alt-right nutbag, I am the most expendable employee.

Secondly, while I am flattered by your assertion that I am one of the best Austin writers, I would really like for Sarah Bird, Lawrence Wright, or Stephen Harrigan to weigh in before I take my official victory lap. I'm not sure I'm even in the top 500. Definitely not in Addie Broyles' league, and do you realize that Ken Herman is a Pulitzer Prize winner? Yeah, I am looking at my shelf right now, and it is definitely light at least one Pulitzer. My guess is that it always will be. You can go hate-tweet at Ken if you want for stealing my glory, but I would say the Pulitzer committee made the right choice. I don't even have a fucking Wikipedia page. How would they do their research?

You know me, though – just because I don't know what is happening at the Statesman other than an editorial change, it doesn't mean I won't weigh in with some half-baked theory. Why? Because I am not a journalist. Of course, you don't need to be a journalist to know that if you hire a new editor, for better or worse, that editor is going to want to shake things up, even if "shaking things up" is basically rearranging deck chairs on the Titanic. Yes, a talented food editor and a Pulitzer Prize winner might get tossed overboard in the process, but that is only proof that shit is getting (un)done.

Truth be told, as far as I can tell, the term "newspaper business" is a bit of an oxymoron. Seemingly, these days you can't have both. Here at the Chronicle, we have charitable souls like the Gamecock Farmers of America who occasionally snatch us from the brink of insolvency. The Statesman, however, is headed straight into an ocean full of icebergs, so it's understandable that the owners would choose some plucky, ambitious soul (as modern editors tend to be) who will pledge allegiance to the quixotic quest to return the newspaper to its anachronistic glory instead of realistically embracing what it is not – and by that I mean TikTok. That shit is dope AF. I mean, if you can't wrap it up in 60 seconds of titillating video, why even? Speaking of, looks like I've exceeded my word count, so I'll just drop this mic right here. 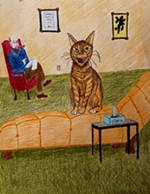 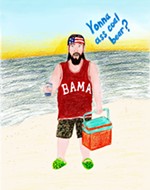 The Luv Doc: Bachelorette Beach Party
Using a special occasion to even mildly guilt your friends into helping you fund your travel fantasies is a bit gauche