The Luv Doc: The Worst Thing

Nobody wants to witness self-indulgent acts on a first date 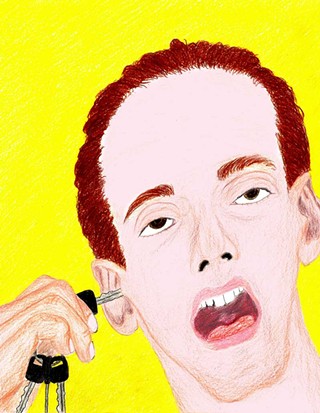 What's the worst thing you could possibly do on a first date? Asking for a friend.

I'm not exactly sure. The list is long. Probably some sort of grisly mass murder scenario would be a turnoff for most people; so would explosive diarrhea, but equally high on the list would be clipping your fingernails while waiting on your meal ... say, at a nice restaurant ... or really even on the bench outside the takeout window at Sandy's Custard. That shit is not OK – even if you just went swimming at Barton Springs and want to get at them while the nails are still soft. N to the fucking O.

Really, pretty much any personal hygiene activity short of actually showering with your date is a bad idea. Does your hair need combing? Need to check your teeth for lingering spinach shards? Apply mascara? Pluck that errant nose/ear/eyebrow hair? Scratch your crotch? Fart? OK, those last two shouldn't be classified as personal hygiene even though I expect a few thousand emails from incels claiming the contrary, but the point is, you can tick off most of those items in the privacy of your own privy prior to your date. The other ones can be handled in a public restroom or perhaps a well-ventilated outdoor area far removed from fellow diners. Maybe Big Bend.

I had a friend who once described a first date during which the gentleman seated across from her at a cozy little table at a crowded French restaurant used a key from his keychain to remove a sizable clump of dark-orange earwax (her words, not mine) from his ear while she was eating her salad and then set the freshly waxed key down on the white tablecloth without cleaning it off. It is important to note that he performed this entire operation unconsciously while describing in excruciating detail his devotion to bodybuilding. Check, please.

Now, before you get all reactionary and claim I am anti-body or unduly averse to bodily functions, chill your shit. All I am saying is that nobody wants to witness self-indulgent acts on a first date. In fact, self-indulgence on a first date is going to be a turnoff for most well-adjusted adults, but you go ahead and be you.

As Billy Shakes used to spit, "Our bodies are our gardens to which our wills are gardeners." Now, I'm as fascinated by gardening as the next fellow, but for me, listening to someone drone on about sets and reps and protein intake is about as fascinating as watching the Home Shopping Network. If that's your jam, good for you! You've found a soul mate! I just think I would prefer to hear someone talk about their explosive diarrhea. Better punchline for sure.

The reliable thing about self-absorbed people is that they're usually too self-absorbed to notice you've nodded off or, better yet, called an Uber and left the building entirely. So, if you find yourself getting ghosted on the reg and you aren't explosively shitting yourself on every first date, perhaps force yourself to take a genuine interest in what your date is saying. Oh, and keep your hands on the table, that way you won't unconsciously scratch your crotch, pick your nose, or reach for your car keys even though you have no intention of leaving.

But what's the worst thing you could do on a first date? That's easy: Admit you don't read the Luv Doc.