Funny faces on the courthouse wall The Ellis County Courthouse in Waxahachie is one of the most ornate 19th-century public buildings in Texas. Among its most unusual features are the faces carved into the stone trim above the entrances.

In the late 1800s, Waxahachie was one of the 10 richest cities in the state. Cotton was king and powered two railroads, three banks, and four cotton gins. The county needed a courthouse that reflected its success. 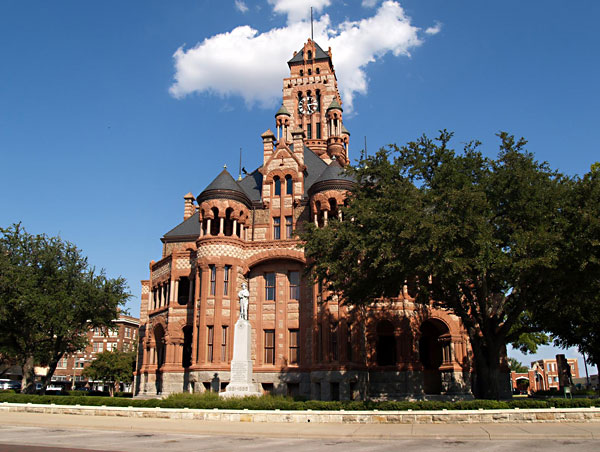 J. Riely Gordon designed 18 county courthouses in Texas, but the 1895 Ellis County building was his masterpiece. The nine-story exterior walls are made of gray granite, Burnet County white limestone and pink granite, and Pecos red sandstone.

The building is a mixture of rough-cut stone and dressed stone accented with smooth-cut columns topped with decorative capitals. Flourishes abound, with carved foliage filling the space around curved entrances and windows. It's a wedding cake of a building topped with a four-faced clock tower.

Unusual among the ornamentation are 21 stone faces that are surprisingly fanciful for the era on the Texas prairie. The faces range from happy to angry, mundane to mysterious, all executed by German stonemasons. 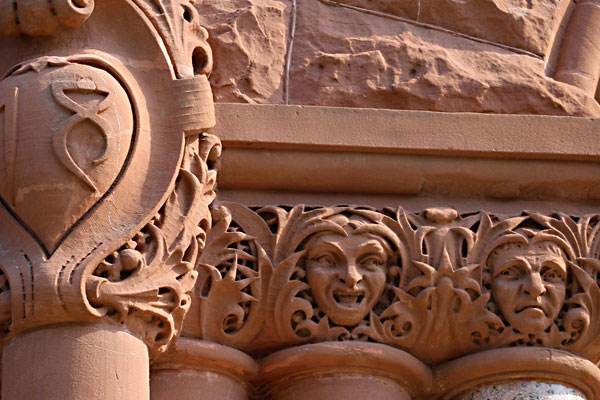 The north porch has the most faces, including the mythical Green Man, a tradition of European stonecutters.

Above the east porch, the face of the fair maiden is supposedly Mable Frame, the daughter of the landlady of Harry Hurley, one of the artisans. When Mable spurned Harry's attentions, he used her likeness for some of the more grotesque faces.

The Ellis County Courthouse is at 101 W. Main in downtown Waxahachie. If the courthouse is open when you visit, take a look at the exquisite woodwork inside.

1,526th in a series. Follow “Day Trips & Beyond,” a travel blog, at austinchronicle.com/daily/travel.